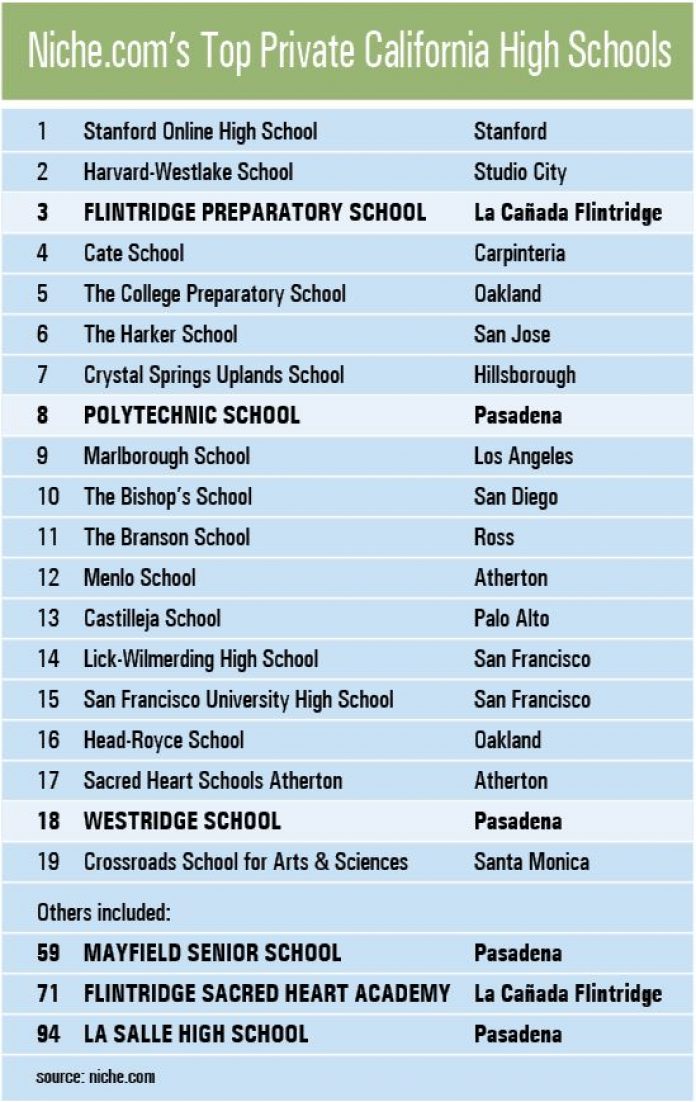 A trio of Pasadena-area private schools recently received prominent placement near the top of an online list published by Niche.com, a popular review website aimed at consolidating detailed information about K-12 schools as well as colleges, cities and neighborhoods. Flintridge Prep, Polytechnic and Westridge were recognized as three of the top 20 private schools in the state.
Niche’s “2016 Best Private High Schools in California” rankings featured Flintridge Prep at No. 3, Polytechnic came in at No. 8 and Westridge finished as No. 18. The schools achieved these honors by rating high in a variety of weighted factors, including SAT/ACT scores, student-teacher ratio and the quality of colleges that students consider. Reviews from students and parents regarding extracurriculars also played a role in calculating the rankings, which highlighted the top 100 out of 309 schools that went under the microscope for this particular online list. 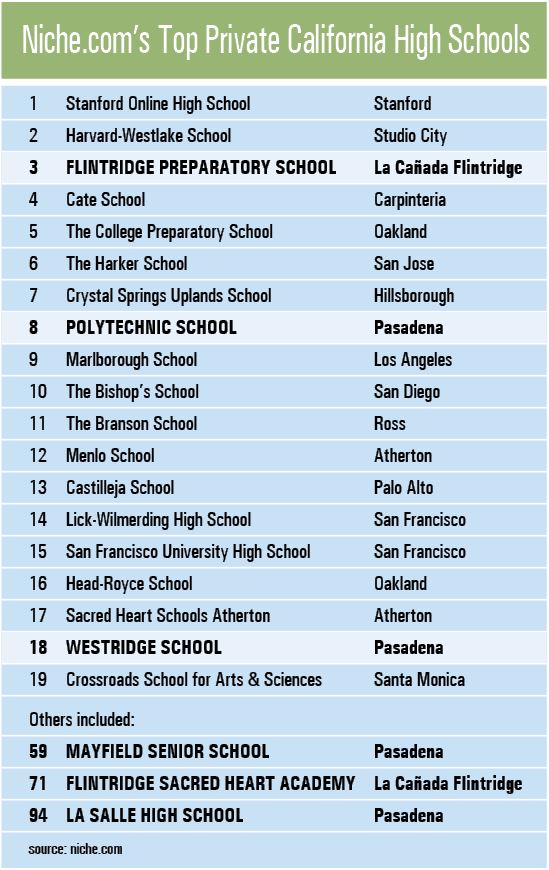 “What I liked about Niche is that it drew from a lot of different sources,” said Flintridge Prep Headmaster Peter Bachmann. “They looked at numbers and things like that, but they looked at student comments, parent comments, alumni comments so that it had a real qualitative feature, not just quantitative. That’s the reason we’re proud of those. It felt like the full dimension of Prep was being acknowledged.”
Niche, formerly known as College Prowler, computed these rankings by evaluating public data for each of the aforementioned factors. Private high schools are required to report much of this information to the U.S. Department of Education and the National Center for Education Statistics. Since Niche takes a variety of factors into account when determining rank, the company’s data team processed each of them differently using specific statistical approaches, such as the Bayesian Method.
“It also depends upon which data we have access to,” said Niche Marketing Outreach Coordinator Jessica Hair. “Particularly for private schools, we tend to focus heavily on data that we have more information for and more reliable sources for as well as how important we think that factor would be in determining the holistic ranking.”
Niche took into account school-specific survey responses submitted by students and parents registered on the website — which offers scholarships as a way to attract users. A minimum of seven responses per survey was required to achieve an acceptable sample size, according to Niche.
One of the survey questions asked, “What are the best things about this school?” An overriding answer that Niche users from Poly gave was that the teachers at the Pasadena K-12 school “are very engaging and want to teach.”
“For more than a century, Polytechnic School has had the opportunity to serve the youth of our community, and we are fortunate to have done so alongside the other wonderful schools in Pasadena,” Poly Head of School John Bracker said in a statement.
The average SAT score for 50 Poly students who submitted their individual scores to Niche last year was 2110, well above the national average of 1700. Flintridge Prep’s 86 respondents averaged a score of 2140 on the SAT while 76 Westridge respondents checked in with an average of 2040. The mean ACT scores at each of the three schools were several points higher than the national norm as well.
“It’s always great to be ranked favorably and to receive high grades from review sites,” said Westridge Head of School Elizabeth McGregor. “I think that the rankings can be helpful for families, particularly if they don’t know the area. But I think there’s always a cautionary tale that comes along with it. Rankings shouldn’t narrowly define each school. Educated consumers need to look into exactly how the schools are being rated and what are the components that go into determining the rankings because schools are being compared with one another, and the comparisons are not always apples to apples.”
Said Westridge Assistant Head of School Jemma Giddings: “We want to make sure that we’re intentional about not reducing our own students to numbers on a metric.”
Flintridge Prep rose five spots from where it landed in last year’s iteration of these annual rankings, according to Niche. Poly experienced a five-spot bump and Westridge ascended four slots. Other Pasadena-area private schools that cracked the top 100 were Mayfield Senior School at No. 59, Flintridge Sacred Heart Academy at No. 71 and La Salle High School at No. 94.
“I don’t have an illusion that a school that was behind us in the rankings isn’t an equally fine school,” added Bachmann. “I don’t take these numbers literally. I just like the fact that we are considered among strong, quality schools offering strong, quality student experiences.
“It makes it easier to attract teachers, and we like to think it influences colleges when they look at our candidates.”