Heifer Intl. Donors Give Vietnam Villages Leg Up From Poverty 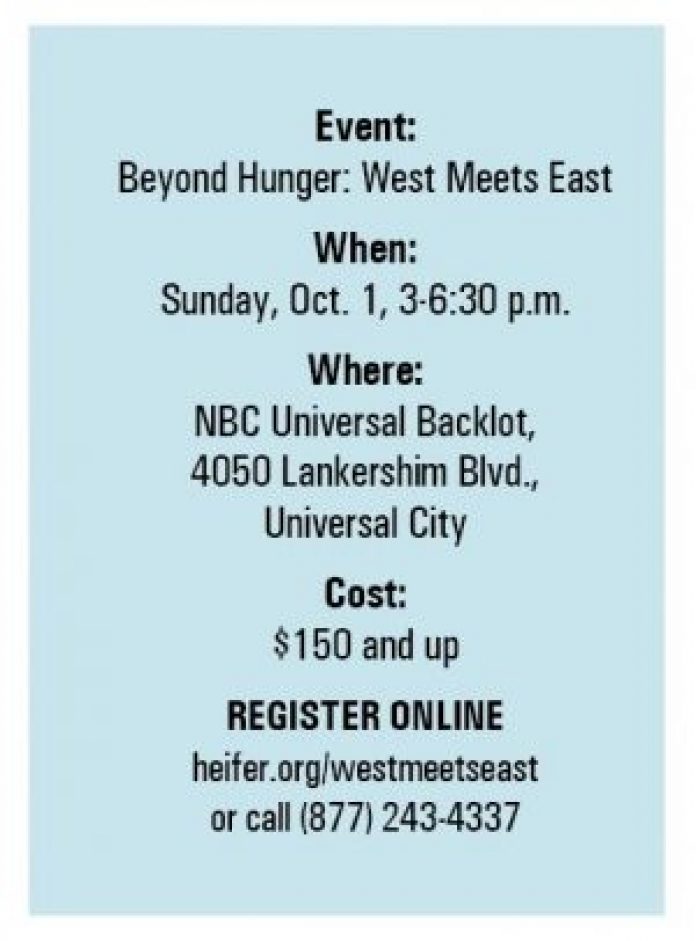 For anyone out there feeling depressed about the news lately, Rob Floe has a message for you: Do something. Do something good, with people you like.
It seems simple enough, but Floe has set the bar pretty high — solving world hunger, nonetheless. The founder of Partners For Change has created a donor support group for Heifer International, a global nonprofit that has helped thousands in more than 20 countries around the world break out of crushing poverty and hunger by providing them with sustainable farming.

Following the philosophy “Give a man a fish, he eats for a day; teach a man to fish, he eats for a lifetime,” Heifer International has its own mantra, giving “not a cup of milk, but a cow.”
In just three short years, Partners For Change has adopted its own Dairy Development Project through Heifer, pioneering a sustainable milk production model for small-scale farmers and changing the way of life for 7,108 families in two small provinces in southeastern Vietnam. So far it has raised about $1.3 million to provide the villagers with cows and training for a dairy farm.
And the other best part? Doing it with friends, he said.
“I thought that if we combined community and philanthropy, we could make a really big impact,” he said. “This is a far more fulfilling way to be involved in philanthropy than just writing checks. We become very educated about the problem and work to find a solution.”
The Partners For Change meets monthly, often over food and cocktails — and sometimes by ringing a cow bell — and has brought a group of about 20 together over a common goal, with plenty of camaraderie.
“We form really great relationships together, and what we all gain from this, instead of a sense of helplessness, is a sense of empowerment because even though we’re a small group we’re impacting somewhere else in the world,” he said. “We all believe that —while we’re big supporters of local charities and always will be — we also think we need to take a broader view as Americans and try to understand the suffering in the world and do something about it.”
As a financial adviser for his Floe Financial Partners company, Floe spends hours each day researching international news to better advise his clients on investments. It was the summer that ISIS really started to gain territory in the Middle East that he decided he needed to move into action.
“They were establishing this ‘hell on earth’ kind of place, and my feeling was, rather than just be frustrated and hurt and angry, what could I do on a local level that could impact the broader world?” he said.
Surrounding himself with like-minded people was a good place to start, he decided, and began asking friends if they would join him for a project. The group began to grow and focus on a cause, ultimately approaching Heifer for some opportunities and then voting from three different projects to adopt the dairy farm project in Vietnam. The group chose Vietnam — out of other projects in the U.S. and South America — in part because it was where they could impact the most people and really change lives.
Cheryl Bode of Altadena, one of the PFC founding partners, said the work has been an awakening of sorts. 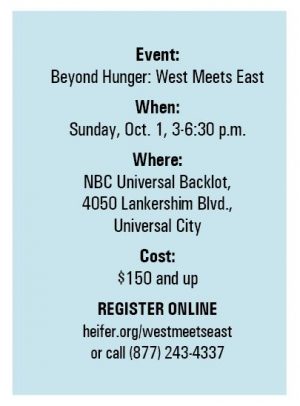 “It started really just as a concept, but we’re growing and figuring out how this all works. It’s really brought us much closer together and we appreciate each other on a different level now. The work is really two-fold; not only are we supporting the farmers in Vietnam, but we’re supporting and helping each other,” she said, noting that when the project wraps in 2019, the group will likely ask Heifer to present them with other projects.
PFC aims to fundraise a total $3 million to complete the Vietnam dairy project, and will soon put on the biggest fundraising event the 73-year-old nonprofit has ever had, said Heifer Marketing Project manager Kimberly Nixon. The “Beyond Hunger: West Meets East” event will take place at NBC Universal, and is set to raise awareness among some of Hollywood’s finest for the Vietnam effort and Heifer International.
“Partners For Change has been really fun to work with, and a very dedicated and engaged donor group — they are unique. We don’t have any groups that have gone to the extent that this group has,” said Nixon, who has worked closely to support the team. “There is something exciting about seeing people you’re working with and living with in the same community and doing this work.”
Part of Heifer’s process is to provide participating farmers with the livestock, supplies, expertise and support they need, along with the knowledge of how to care for the animals, derive products from them such as, in this case, milk and cheese, as well as the education of how to market the products and maintain a healthy business. Then, Heifer leaves. But the work is far from over. Before committing to the project, PFC visited other Heifer communities to see the process at work. The group has since traveled twice to Vietnam, surveying the project, getting its hands dirty and team-power thinking on any obstacles.
One of the reasons Nancy Fairchild said she loves Heifer’s work is because the change they make is sustainable, transforming over time and affecting all sectors of the community that participates. 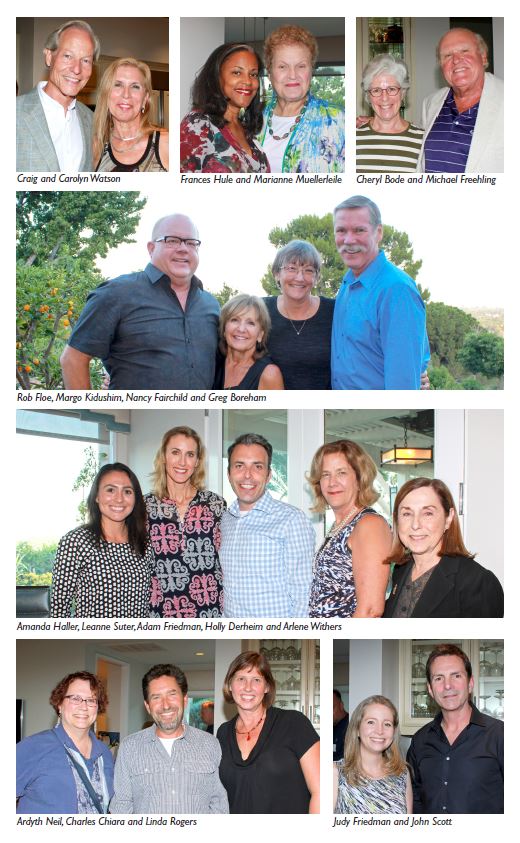 “It’s just outstanding what they accomplish in these communities, taking families who earn less than a dollar a day to being self-supporting and empowered to help themselves,” said Fairchild, who with her husband, Greg Boreham, has also visited a Heifer project in Guatemala. “The communities run it themselves, they administer micro-loans, they decide among themselves who gets the money … local people really emerge as leaders. Heifer is making a huge long-term difference, and its growth is not only generational, but horizontal across the community even long after Heifer is gone. To me, that’s permanent, sustainable change.”
Another strength among participants is that by working together, they can share processing facilities and collectively operate as a huge farming operation to deliver larger quantities of product, negotiate with larger retailers and even affect market pricing.
Fairchild noted that during one of her trips to Vietnam, she met a woman who really brought Heifer’s mission home to her. The woman, Fairchild noted, was similar to herself in having two sons also just two years apart, but had been trying to eke out enough to eat for her family from a tiny plot of land next to their dirt-floor shack. Her husband was never home because he was always trying to find work from city to city, and her boys couldn’t go to school because they have to pay for schooling and she just didn’t have the money. Then, Arkansas-based Heifer came in. Now, the family has a sustainable farming business, her husband is home and her boys go to school.
“I have two boys away at college, and I just thought ‘Wow,’ because I realized she wants the same thing for her kids that I want for mine, and that’s education and opportunity. That’s all anybody wants in the world,” Fairchild said.
Margo Kidushim said she loves being a ‘Partner For Change’ also because of the gender equity element of Heifer, which is one of the cornerstones of the nonprofit. In Heifer’s work, gender equity is central to its success. It teaches communities that men and women must work side by side in equally respected roles and responsibilities in order for a family to lift itself out of poverty, and confronts issues of patriarchy and inequality head on. Also, women are more likely to share the fruits of their education and success with their families, according to the nonprofit on its website.
Kidushim relayed the story of a woman they met in Vietnam, who once lived in a small thatched hut with a dirt floor. After seizing Heifer’s opportunity and with much hard work, she now uses the little hut as a supply room, and built the largest house in the entire community next door to it.
“She has enhanced her own living, supported her whole family and risen from living in a shack to a beautiful home,” Kidushim said. “[The women] have been subservient for so long, and now all of a sudden they’re given this opportunity and they just shine with it and are very, very successful.”
Heifer’s last request to participants is that they pass on the gift; once their projects are established, families that received resources from Heifer — such as livestock, seeds or training — pass those on to other families in need in their community.
Partners For Change has adopted the Heifer philosophy all the way, Floe said, believing that they truly can change the world, one family, one community at a time.
And you can do it, too, he noted. But you should do it with friends, and maybe a cowbell.
For additional information about the organization, visit heifer.org.