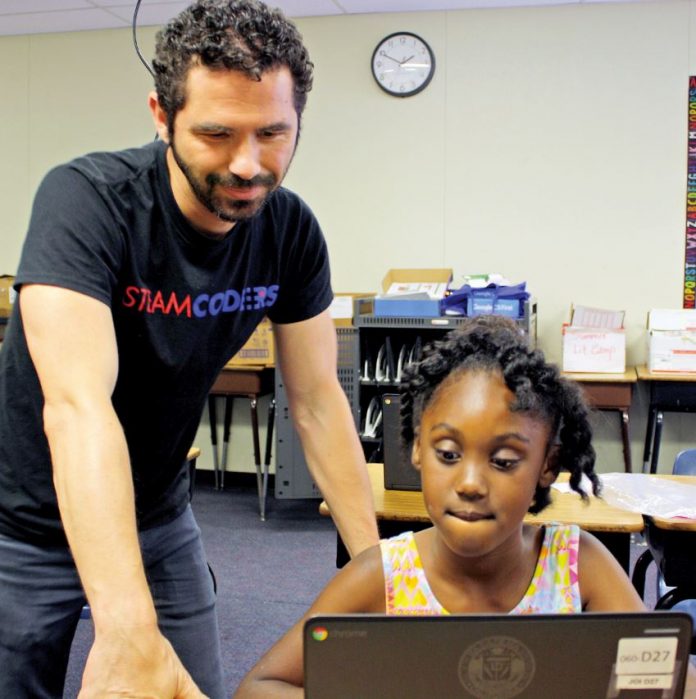 At a Norma Coombs Elementary School day camp recently, little hands and fingers flew over Chromebooks, with color puzzle pieces being dragged into place as the campers built a fictional, interactive story through the introductory Scratch coding program.
“You just have to play with it,” Michael Dragomir, a STEAM:CODERS summer camp teacher, told a 3rd-grader, who needed little encouragement as she did just that. She readjusted her headphones and dragged a different piece to see how that might change things up in her virtual-reality fiction, which happened to be a story about two girlfriends chatting in the park.
Playing with tech is the new game this summer for this crew and a slew of young Pasadena Unified School District students, many of whom never would have the opportunity if not for STEAM:CODERS. The local nonprofit teaches underserved and underrepresented kids in K-12 the fundamentals of science, technology, engineering, art and math — STEAM. Through weekly summer camps, programs and weekend classes, STEAM:CODERS is teaching students logic, critical thinking and problem-solving.
The goal is that students will never let it go, said Director of Operations Charmayne Mills Ealy, overseeing the last day of summer camp offered for free at Norma Coombs.

“The idea is that they can go home and continue to work on their stories from home if they have resources to do so, but really this class is meant to foster the critical-thinking elements. I want them to grasp the logic and science fundamentals,” she said.
Since its inception in 2014, STEAM:CODERShas reached more than 4,000 students, and for about 65% of them, this has been the first encounter with any aspect of computer science. The classes include coding for mobile app development, video game development, cybersecurity and robotics, among others; coding programs run from introductory ones, such as Scratch, to the more advanced JavaScript and Python. In each class, students complete their own creatively designed apps, programs or robots, giving them the confidence to continue creating down the line.
“African American and Hispanic demographics working at high-tech companies are extremely low, and in management obviously, even lower,” said STEAM:CODERS founder and Executive Director Raymond Ealy. “A lack of exposure to the STEAM disciplines during their early childhood education puts students at a distinct disadvantage for future success in these fields.”
Many of the students from the Title I-qualifying schools come from socioeconomically challenged households. About 50% of STEAM:CODERS kids lack computers, tablets, laptops and Internet access. At one of the nonprofit’s class sites, more than 30% of the students served are in foster care.
Those factors, combined with many others, are major barriers to student success, said Ealy, who created the idea for STEAM:CODERS after working with the Gamma Zeta Boule Foundation mentor program LAMP. He and a group of others noticed the young men they were mentoring lacked the proper exposure to science and technology, and by the time the students were applying to college they were significantly lagging in computer science skills.
“We saw that the pipeline is bare — if you don’t get enough kids to get a competitive pool, it’s just too small to amount to anything, to make a dent in those numbers,” he noted. “Our job is to make the pool bigger so there are more opportunities.”
That also means starting with younger kids, Ealy emphasized, and not waiting until technology might be a high school elective, when kids see how far behind they already are, get frustrated and discontinue.
“We want children to run toward technology, embrace it and move forward with it, not run away from it,” added his wife, Charmayne Mills Ealy.
With a tight $270,000 budget, STEAM:CODERS is building out through strategic collaborations and a network of partners, including educational institutions like the ArtCenter College of Design, Caltech, Harvey Mudd College and Pasadena City College, among others. The nonprofit employs about 20 part-time teachers and employees, able to give classes at participating schools and using their computer labs or Chromebooks.
Teacher Dragomir, a software engineer, said he enjoys the interaction with the young kids, and the excitement when they “really get it.” He won’t show them how to do something, he said, noting that figuring out the program on their own is part of the teaching.
“I really just try to steer them in the right direction, ask them, ‘How do you think you can solve it?’ I try to help them talk through the logic of solving the problem,” Dragomir said. “They can actually build some really cool stuff and interactive games.”
One student, Sandra Gonzalez, explained that she enjoyed using coding to tell stories by animating characters on the screen to say different things to each other. “You have to figure out the timing and try different options so people don’t talk at the same time,” she noted.
Gerado Leal, in his third week of coding camp, also said he learned a lot: “I learned from this camp that you can do anything with a Chromebook.”
Nearby, Genesis Montgomery carefully clicked through the steps of CS Scratch, demonstrating how to navigate and manipulate the online world. “It is a lot of work,” she said, smiling broadly, proud of her progress.
Reaching girls in particular is another, newer goal of STEAM:CODERS. This past year, they’ve amplified “girls only” coding classes, which fill up so quickly there’s even a waiting list. This is to help mitigate the relative lack of women in computer science fields. According to one recent study, high school girls make up almost half of all math and science AP test takers — 48% in calculus, 47% in chemistry and 58% in biology. But by contrast, only 18% of computer science AP test takers are female.
STEAM:CODERS also has been collaborating with Warner Bros., taking field trips with all-girls classes (they have trips for boys, too), and meeting with the company’s female employees, who spend a day with the girls, explaining and showing their various jobs in tech and design.
“The girls really love being together, they really embrace it and seem to feel more comfortable to ask more questions without the boys,” Ealy noted.
Last week, parent Elisa Honorato waited as her 11-year-old son, Ivan, finished his last day at camp. She talked about how wonderful STEAM:CODERS has been, noting she can envision Ivan going into a technological field someday.
“He’s been using our computer at home to log in to keep working on it outside class. He’s just loved it,” said Honorato, noting that this is a class they would not be able to afford if they had to pay out of pocket. “This is a phenomenal program, and I think will help him a lot in the future. This helps the kids keep learning, and it’s a great help to the parents in summer, too.”
To learn more about STEAM:CODERS, its classes, programs or how to donate, visit steamcoders.org.

Sahale Greenwood contributed to this report.