Poly Senior Walks the Walk, and More, to Fight Diabetes

Taylor Stimmler wasn’t born with a superpower, but she embraces the one she has now.
“People point to a dish and I can tell them exactly how many carbs are in it,” joked Stimmler, 18, who just three short years ago was diagnosed with Type 1 diabetes at her pediatrician’s office.
It’s typical off-the-cuff humor for Stimmler, the lead volunteer for the Juvenile Diabetes Research Foundation Los Angeles chapter’s Youth Ambassador Program. Apart from organizing family-centered events intended to spread awareness of T1D, provide mentorship to young children and raise funds for research of the disease, Stimmler has created her own community online through group chats with young children of all ages, lending a listening ear, giving encouragement and suggestions or just sharing some “diabetic humor.”
“We exchange funny little diabetic stories all the time. Sometimes they just need to vent when they’ve had a bad day because they’ve felt so bad,” said Stimmler, noting that some of her mentored buddies are so young, it’s easier for them to send emojis or videos than to type. “I love it, I love getting their little emoji messages.”
T1D is an autoimmune disease that strikes children and adults suddenly, when the body stops producing insulin. It’s serious and stressful to manage, and there is nothing that can be done to prevent it. Currently, there is no cure, but one of Stimmler’s goals is to see one in her lifetime.
Taking JDRF’s motto of doing what it takes to help turn “Type One Into Type None” to heart, the Polytechnic School senior has created a team, the Injectibles, that has raised more than $50,000 for the JDRF One Walk — and become one of the top 10 family fundraising teams for JDRF. That’s an impressive feat to have accomplished in such a short time, according to the nonprofit organization.
“Taylor is such a superstar,” said JDRF L.A. Development Director Sue Pietrzak. “She took her diagnosis remarkably well. It’s a disease that changes not only her life but her family’s life … but being part of the cure is something Taylor is living for. She has such spirit and is just one of those leaders.”
Initially, Stimmler said, she was devastated to get the diagnosis. She had never been good with needles, (of her three siblings, she was always the one to go kicking and screaming into a vaccine injection) and a diabetic needs to check blood sugar levels with needle pricks, sometimes up to 10 per day, as well as insulin injections. But there was more. At just 15, Stimmler was starting out at a new high school, Poly, and like most teens, she was feeling hyper self-conscious that having T1D would make her the odd person out.
“I was a closeted diabetic at first,” Stimmler recalled. “I just didn’t want this diagnosis to be the first thing to follow me; I didn’t want to call attention to myself for it as a freshman at a new school, I didn’t want them to treat me differently or judge me.”

Participating in the first JDRF One Walk was a little like “my coming-out party” to her family, Stimmler said. After that, playing on the water polo team helped her lose her inhibitions, as she had to get out of the pool to monitor her glucose levels. She quickly realized that “no one cared as much as me.”
Now, the team gets out with her midway through practice to also have a snack break, a tradition the other teens have rallied around, and not just because they love the graham crackers. Stimmler’s full-throttle support for JDRF has become infectious.
Stimmler refuses to let the disease slow her down. Not only is she fierce in the water, she’s also visited Nicaragua twice (the first time during the Zika virus outbreak) as part of a school trip without her parents, and hopes to go again this summer, perhaps for a few months.
“There are no limitations. I can’t think of anything that’s held me back,” she said. “If anything, it’s provided me with more opportunities.”
She refers to an enormous sense of community that’s come with her diagnosis. That includes her classmates at Poly, some of whom she doesn’t know well, who will run her down on campus after spotting her blue medical bag (she must always carry a purse or backpack with her medicine and supplies) left behind in a classroom. One time, she fainted in class and her classmates knew enough to get a juice out of her bag and get some into her.
Her mom, Meghan Stimmler, noted that has a lot to do with her daughter’s talking about her disease and explaining how she has to manage her glucose levels to others.
“I was so grateful for that moment when her classmates stepped in; it says a lot that they knew enough to do that,” she said, recalling how her daughter went from wanting to hide the disease (checking her blood levels in a bathroom stall and even the car outside) to fully embracing it and rallying everyone she knows to create awareness. “It was devastating at the beginning, but she’s gone from not wanting anybody to know to really leading the charge. She’s really owned it. It’s been a good lesson on perseverance — everything can change in a moment, but you still can go on and do what you want to do.”
Because Stimmler and others with T1D often wear devices, like a continuous Dexcom glucose monitor on the upper arm, those with the disease often recognize each other in public, and dole out lots of random, free hugs.
“I never understood the sense of community until I was in a community that I didn’t ever wish to be in,” said Stimmler, recounting how she’ll receive random hugs from other young people wearing a device, like at the Coachella music festival. When she wears her JDRF T-shirt, she gets stopped in the street, sometimes by young children. 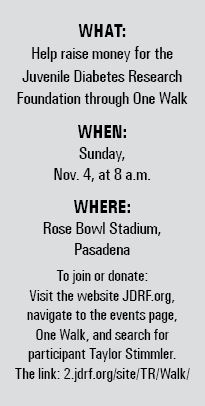 “The T1D community is not shy. I call it ‘finding diabetics in the wild,’” she said, laughing.
This year will be Stimmler’s last as lead ambassador for JDRF, as she’s off to college next year. She plans to study medicine in some regard, and maybe minor in child development. But wherever she goes, she plans to continue the advocacy for T1D, bridging the gap between the youth program and the adult, perhaps creating a young adult group on her new college campus.
She also hopes to advocate for some cost reform — while her own family is lucky enough to have good insurance to cover the advanced technology that improves her quality of life (with fewer injections and pin pricks) — others do not, she recognizes. In general, diabetes is an expensive disease to manage, with the high cost of insulin beyond the reach of some.
“My hope is for a cure, of course, but technology is advancing and that’s great, too — but I do hope for better gadgets and that more people can have access to them. This technology isn’t available to everybody. It can make a huge difference … the advocacy is important,” she said.
Part of that goal is fundraising for research, and this will be Stimmler’s next big project: JDRF One Walk. It will be her last one for a while. Apart from helping to transform the junior ambassadors program, creating more family events and strengthening the mentorship, she is intent on walking the talk at JDRF One Walk. She’ll gather as many friends and family as possible to raise money for the cure.
“I appreciate that I’ve been diagnosed with this old enough and mature enough to understand, to take this position and go farther with it,” she said “I love doing this, I love having the connection with my buddies. … This is probably my last walk that I do for a while, so I want to go out big.”