Local folklore has long claimed Pasadena to have one of the largest numbers of nonprofits per capita in the nation.
And for anyone living here, it would be difficult not to be touched by one, whether it be on the soccer field with AYSO, through efforts to achieve a carbon-free city, at a university like Caltech or Pasadena City College, the local theater, museum, church or even Huntington Hospital.
Some of the city’s stalwart nonprofits, in fact, have endured for more than 100 years, standing by services that have helped develop rich cultural and artistic centers, beautiful parks and libraries, green spaces and great schools. Although local residents are acutely aware of the importance of their nonprofits, the exact number of such organizations in the city has been less definable, due mainly to the challenge of sorting out the active versus nonactive and the wide variety of organizations able to file for tax exemption.
One local nonprofit, Leadership Pasadena, set out to establish not just how many nonprofits there are but also their fiscal impact in the city, commissioning a special report from the California Association of Nonprofits that broke down the number for Pasadena proper, excluding Altadena, Sierra Madre or South Pasadena. CalNonProfits concluded that there are 1,021 nonprofits in Pasadena. Using a population of 141,000, that means there is one nonprofit for every 138 Pasadena residents. 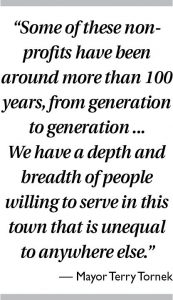 The city’s generosity is something Tornek said he continues to admire, especially when it comes to voting on issues that might make a difference in the homeless crisis and affordable housing. In November, Pasadena approved tax hikes through Measure I and Measure J, which respectively increase the city sales tax and guarantee that money be allocated to local needs, including city emergency shelters; address homelessness; and fund children and youth programs and public neighborhood schools, among other needs.
“This is a city that voted to tax itself 2-1 because it wants us to maintain first-class services,” Tornek said. “When you’re confronted with enormous issues such as homelessness, you either throw up your hands or you go at it. It’s been the Pasadena way not to surrender to these problems but to go at it head on, and that’s what we’re doing. We’re going to make progress.”
Tornek added that the long history of philanthropy among families in town is at the heart of the charitable industry.
“Some of these nonprofits have been around more than 100 years, from generation to generation,” he said. “We have a depth and breadth of people willing to serve in this town that is unequal to anywhere else.”