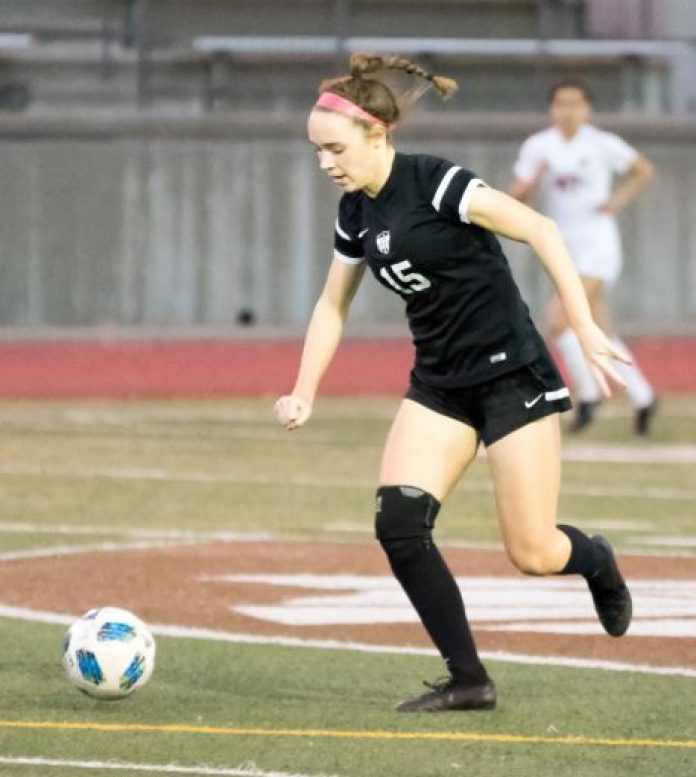 By Alexander Payne
The Outlook

The Flintridge Sacred Heart Academy varsity girls’ soccer team fell short of capturing its second CIF Southern Section title in the program’s history, falling to visiting Oak Hills of Hesperia, 1-0, in the Division 3 championship at St. Francis High School last Saturday.
The lone goal of the match came in the 21st minute when freshman Kolo Suliafu held off a defender and chipped the ball into the back of the net after receiving a long pass from her sister, Tupou.
The Bulldogs (22-2-2 overall record) backed off their attack in the second half and switched to a 4-4-2 formation after opening with a 4-3-3.
“We tried to take advantage of playing in the middle of the field and brought our players back in the second because most CIF finals are decided by one goal,” Oak Hills head coach Joe Kulm said.
This statement also proved true when FSHA defeated San Clemente, 1-0, in the 2011 CIF-SS championship. The change in scheme made Oak Hills susceptible to an attack from the sidelines, which Flintridge Sacred Heart took full advantage of in the final 20 minutes.

Momentum fully shifted in support of the Tologs (11-5-3 overall) in the second half. The majority of scoring opportunities came from the aggressive play and skilled passes of sophomore Madison Leroy and junior Lauren Bolte.
Juniors Emily Gomez and Madeleine Hara had key goal attempts in the second half. Gomez had several shots sail over the bar and had one punched away by the Oak Hills goalkeeper in the 75th minute.
Jillian Willis had a good opportunity with three minutes remaining in the match, but the senior’s shot over the defense went over the crossbar.
FSHA goalkeeper Joshlyn Aguirre turned in a stellar performance and recorded nine saves to keep the match close, including two acrobatic saves that the crowd appreciated.
Flintridge Sacred Heart’s season will continue in the CIF State Division 3 playoffs. The Tologs traveled to Los Angeles to take on New West Charter on Tuesday. Should they win the match, they would move on to face El Cajon Grossmont or Downey today at 4 p.m.