Helping Exploited Teens, Foundation Lives Up to Its Name

For the past nine years, the Give-Mentor-Love Foundation volunteers have filed into the Pasadena Victor Treatment Centers weekly to provide the girls living at the specialized-care facility with a welcome gift or an art class, an experience such as high tea or a life skill like sewing.
But mostly, the volunteers — local career women from all walks of life — come to make a connection, be a positive influence and try to share something fun, to help make the young women feel, well, young again.
Many of the youth at the treatment center, formerly called Rosemary’s Cottages, have been rescued from the sex trade, while others have suffered different types of traumatic physical or sexual abuse. The center spearheads a short-term residential therapeutic program for girls ages 13-19, with the aim of helping them stabilize emotionally and return to traditional foster care or school.
“Many of these girls have never had a childhood — they’ve been robbed of their innocence. So we try to make them feel like little girls again,” said foundation founder Donna Pierson. “They are at a crossroads. They’ve reached the ‘next chapter’ in their lives; they’re trying to move on, and we want to help open a new path for them, one where they can dream and become somebody different, somebody special.”
Foundation volunteers kicked off the new year by completing vision boards with the girls, a life-coaching tactic that professionals have found to be successful in helping set goals. But the starting point for many of the teenagers can be a low one: In past years, several have claimed to want to be hookers when they grow up. Another girl wanted to be a dog. And another, just 13, said she didn’t care — she didn’t plan on living long enough to find out.
“I tell my friends who are interested in joining our foundation, ‘You’ll hear things that will shock you. These girls might say things that’ll make your ears burn.’ But when the girls see us, their faces light up; we get smiles and hugs and appreciation,” Pierson said. “When you have the chance to give something so simple — love and encouragement — and see that it makes a difference, it’s pretty powerful.”
Pierson has heard and seen a lot over the years. More than a year ago, she met a girl suffering from shock, who made strange noises and wandered without speaking or making eye contact. But Pierson heard she liked to draw, and offered her books of paper and drawing supplies. Nearly a year later, the youngster had filled those books, and many more, with her art and eagerly showed her accomplishments. She thinks now of becoming a cartoonist someday. 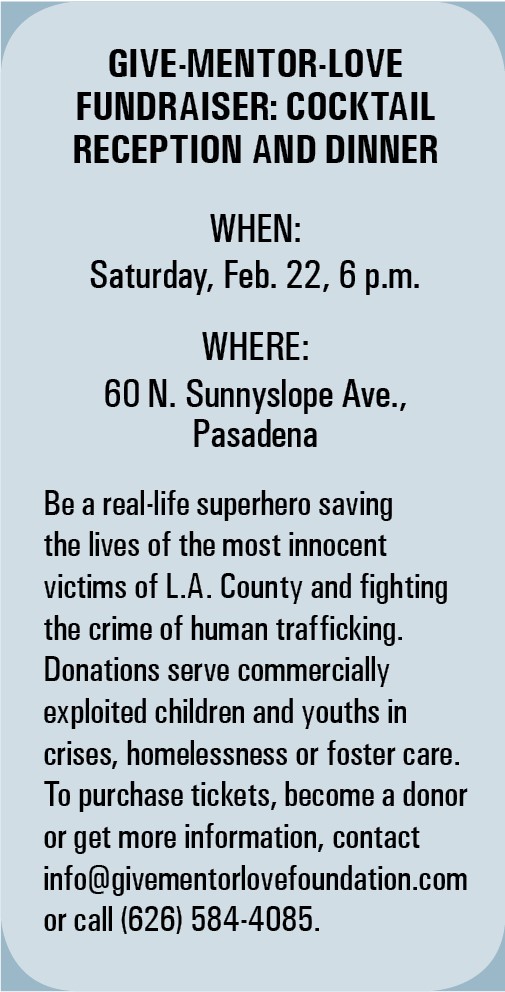 Another child, whose previous goal was to become a prostitute, now thinks of acting or performing stand-up comedy. She’s got a gift for it, Pierson remarked.
“We get to know them and learn some of their talents, and they are incredibly creative children, by the way. We encourage them to think of professions they might like to go into, to think big,” she said.
Pierson founded the Give-Mentor-Love Foundation — previously known as the Cottage Guild, which changed its name after the Victor Treatment Centers took over Rosemary’s Cottages — when she had relocated to the Los Angeles area. Pierson had lived for years in New Orleans, having been raised in Louisiana, and had experience volunteering at an acute-care mental hospital for children. (“I just knew that was where I could do the most good,” she said. “The main hospital already had so many volunteers.”)
Pierson moved to Pasadena shortly after Hurricane Katrina devastated Louisiana, and she longed to find the kind of volunteerism she’d done in New Orleans. After doing some research, she happened upon the young women at Rosemary’s Cottages, and formed her own guild with several friends to make a bigger impact.
After bringing in some fun games and arts and crafts, the women began to learn of the girls’ more immediate needs.
“Every teenage girl wants and needs certain things — makeup, fingernail polish, nice shampoo. Having their own towel was a big one — no one wants to share a towel,” said Pierson, who began to raise funds at luncheons and silent auctions for welcome packages that included toiletries, towels, robes and slippers so the teens could have some privacy in the communal bathroom. “As time went on we became more aware of some of their more physical needs. When they would move in, for example, they would drag in this big black plastic garbage bag containing all of their earthly possessions, which is one of the saddest sights I’ve ever seen.”
The fundraising became more elaborate over time, as did the women’s mentoring efforts. They were making a real impact.
Pasadena Victor Treatment Centers Executive Director Tracy Alvarez noticed.
“The foundation is a wonderful group of ladies who do incredible work with our youth. They’re not just giving away things or money, they come out and spend time with our youth and create really meaningful interaction opportunities while also giving the kids things they would never experience otherwise,” Alvarez said, noting that the volunteers break barriers by doing hands-on, fun activities like Zumba or yoga. “The women set up a very fancy Thanksgiving dinner and teach them table etiquette, how to eat a three- or four-course meal, and introduce them to different kinds of food, but also teach them life skills, and just teach them what being around [career] women is like.”
Pierson “has galvanized an amazing group of hands-on women, who seem to really connect with and love the girls,” Alvarez said. “Donna is very tenacious.”
Since creating the foundation, Pierson has recruited about 28 career women as volunteers, as well as expanded on services and partnerships with other local nonprofit organizations such as Learning Works. At one such recruitment, Pierson made her pitch over lunch to a local restaurant owner, explaining all the great work her team was doing and asking if he would help.
Dulce Santana, sitting behind Pierson, was finishing her meal and couldn’t help but overhear. The description of the work — mentoring young girls who’ve been rescued from the sex trade and abusive and traumatic environments — gave her goosebumps. Santana had been mentored by the Gangs & Girls nonprofit when she was young, and it had changed her life. Coincidentally, she had just been telling her husband she wanted to volunteer at a similar organization.
“I’m at a place in my life where I feel like everything is falling into place and I feel so privileged, it’s time for me to give back,” said Santana, now a young professional. After much hesitation, Santana returned to the restaurant to offer Pierson her services. “It was awkward because I had to tell her I was eavesdropping … but that’s how strong I felt about it. I grew up in a toxic environment and had to leave really young. I just knew I can help, because I’ve been there.”

Years ago, Santana was on probation when she was assigned to Gangs & Girls as part of her rehabilitation. She didn’t realize it at the time, she said, but those overseeing the program mentored her. Mandatory meetings turned into lessons on how to open a bank account, read a pay stub, look for loans, apply to college. She loved it, and the women who guided her; she stayed on to clerk for them and still keeps in touch to this day.
“Adulting in this world is really scary, especially without any parental guidance, nobody to talk to at home, no one positive to be around. When you find someone you admire who’s open and listens without judgment, it’s a pretty amazing thing,” Santana said. “I’m really happy to be able to give that back now; helping to make that moment better. I can relate to them, and I can tell them, ‘I did it this same way.’”
Pierson also recruited Natalie Friberg, now the foundation treasurer, in an effort to diversify the group of volunteers. Friberg, editor of Dreams Magazine, noted how surprised she was at first to enjoy being around the girls so much.
“Each time I go [to Victor Treatment Centers], it’s a totally new and different experience — some of these girls have been through some pretty unimaginable things — but you have a very hands-on involvement as a volunteer, and you can visibly see how important it is for them to have you there,” Friberg said. “They love hearing simple reassurances from us, or feedback or advice. They love the crafts and the parties we throw, it’s just a great thing. I’ve learned things from the girls in ways you wouldn’t expect it — resiliency, for example — and it’s a reminder to me to look at the bigger picture and put my problems in perspective.”
Apart from mentoring and providing support to the girls at the center, Give-Mentor-Love is expanding its reach to partner with the L.A. County Department of Children and Family Services’ Commercially Sexually Exploited Children program, which rescues more than 700 each year from sex trafficking. The program needs help in funding basic needs, like clothing and toiletries, as well as safe housing and transportation, for victims who are hospitalized or rescued.
Pierson said she hopes the foundation’s first big fundraiser, on Feb. 22, will raise enough funds to help the organization expand services at the treatment center and reach more victims of sexual abuse.
“People think of sex or human trafficking as something that happens in a faraway country; they don’t realize it’s happening closer than they think, on our own doorsteps here in Pasadena. The need of these victims is urgent,” said Pierson, noting that mentoring the girls at Victor will help keep them off the streets. “These girls are making progress, they are healing every day. We tell them they are special, and little by little they believe it.”