As Hunger Rises, Foothill Unity’s Effort Does Too 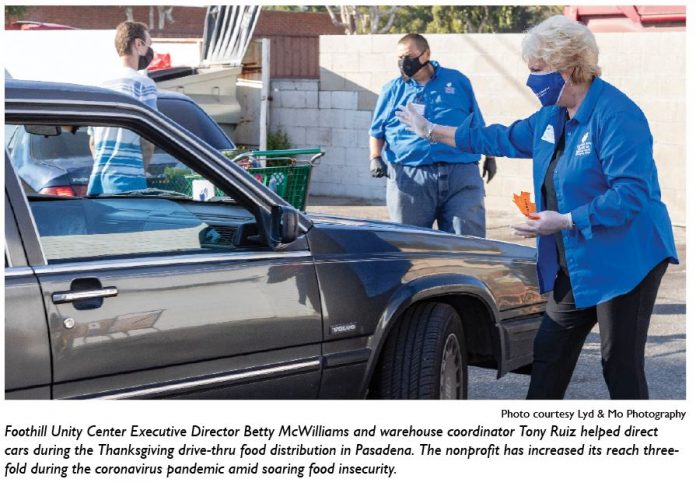 If there’s anything Foothill Unity Center leaders have learned in the nonprofit organization’s 40 years of operation, it’s that need knows no season.
Though it ramped up distribution to deliver more than 4,000 festive food boxes for the Thanksgiving holiday — four times as many as it gave out in 2019 — the center dedicated to providing food services outreach throughout the San Gabriel Valley has seen a steady surge in need since the pandemic took hold in March.
In fact, the need has increased exponentially: Between January and October, Foothill Unity assisted three times as many families through its food services as it did in all of 2019, with a troubling 72% of that relief going to new participants, or families the nonprofit had never helped before. It also increased deliveries by nine times during that 2020 period as food insecurity among homebound seniors shot up, said Executive Director Betty McWilliams.
“The number of new clients is alarming; that is really huge because it means we are seeing people who are struggling to keep the roof over their heads. Some are unemployed, others have returned to work but are still underemployed, getting fewer hours, and others might be facing debt they took on when they lost work,” said McWilliams, who has dedicated 21 years to the nonprofit after starting as a volunteer. “It’s not just those who are in need now, either. We really believe there will be another surge toward the end of the year and even in the new year, and then a recovery period as well.”
The nonprofit has faced enormous challenges during the pandemic — it had to close its food pantry centers in Pasadena and Monrovia to the general public and reinvent the wheel of distribution, creating drive-thru shopping sites and walk-up opportunities, while also growing its delivery system to help those who cannot risk going out.
“The challenges have been organization-wide; we had to close the buildings to the public but we never stopped services, and it felt as if every day we had to adjust and modify in a new way. Our number one concern was to keep services going to meet the need,” McWilliams said, adding that she expects the nonprofit to serve the equivalent of about 1.3 million meals this year, although that projection is increasing all the time.
Part of the increase is due to a decision made by the nonprofit and its board early on: “We decided not to ever turn anyone in need away, and that we treat people with love, dignity and respect.”
Food services outreach has always been a central component of the center’s mission, but over the years Foothill Unity has become an all-encompassing community nonprofit, one centered on “neighbors helping neighbors,” to provide access and opportunities while removing barriers for low-income people including the working poor; offering a safety net of services to the disadvantaged to prevent homelessness; and support the underserved homeless population. Its service area includes 12 cities across the San Gabriel Valley and about 32,000 adults, of whom 10.2% are unemployed or involuntarily part-time workers. Nearly 22% of households in the area are considered to be food insecure.
“Foothill Unity is about helping people move out of poverty,” McWilliams said. “The need for food might get people through the door, but once they are here we have integrated supportive services that can help them thrive; crisis case management; health, housing and homeless services; and job development. We are much more than just food services.”
The agency has also become a favorite among volunteers — in 2019, it counted on 6,000 such helpers, which McWilliams notes is a source of pride: “We are all about the community and keeping it well and healthy, and that includes promoting volunteerism. When you do good, good comes to you.”
Speaking to that, the nonprofit’s operations have flourished this year, due in part to decisions taken before the pandemic that have increased its capacity, including the creation of a produce hub at a new building and parking lot in Monrovia. Another move, the purchase of a 24-foot refrigerated truck, has allowed the agency to pick up larger quantities of food, which it now uses to help supply 10 smaller food banks throughout the valley. The Los Angeles Regional Food Bank has named the center the top food pantry in the county, and it was also recognized as the 2019 California Nonprofit of the Year.
Tashera Taylor, Foothill Unity deputy director, noted that though the work has been nonstop this year, it’s also been gratifying to help meet the need in the community. 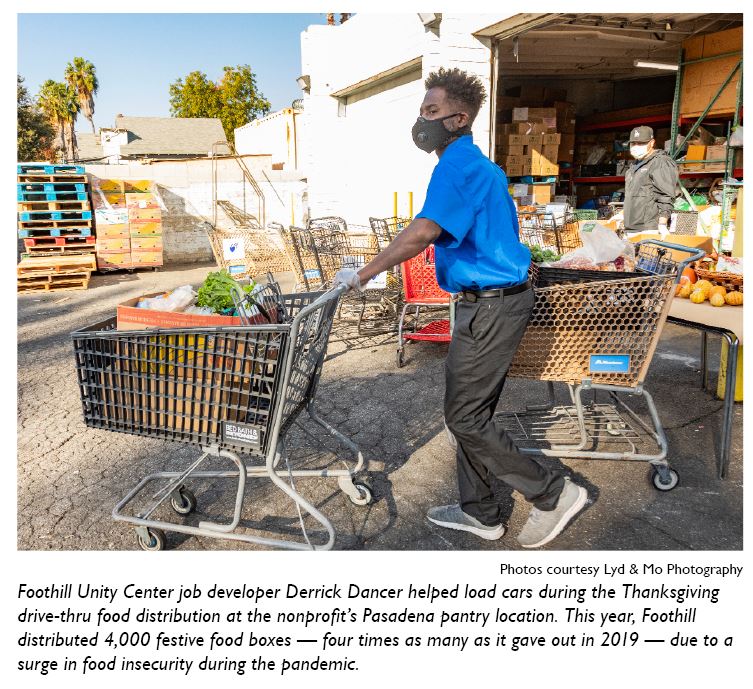 “No day is ever the same, that is for sure,” said Taylor, who began working at the nonprofit more than 10 years ago, on the tail end of a recession that reminds her of what she is seeing now. “There has been a realization over time that people come in with many layered needs. There are often underlying needs that have to be met so that a person can move forward to succeed, and that is what we strive for, to build that relationship and figure out ‘How can we advocate for this person?’”
So far this year, and by working with partnering organizations, the nonprofit has been able to permanently house eight families and place 21 homeless people in motels. It also hosted its annual mobile dental clinic in partnership with USC’s School of Dentistry, where it was able to help 82 individuals.
Now, as the holidays unfold, the agency is making a push in preparation for its Holiday Distribution event, which will include holiday food boxes as well as gifts and gift cards for the children. The agency will also continue its annual Holiday Angels Program.
“COVID has been incredibly challenging, but it’s also allowed for some creative and effective shifts to take place. We had talked for a long time about bringing food access to the wider public and now it feels like we’ve achieved that,” Taylor said. “We don’t know exactly what the future might hold but we are quite certain there’s going to be a lengthy recovery period, so our job development service is going to be more important than ever, and people are going to need eviction protection support as well.
“All of our departments are thinking ahead [about] how we can best be prepared with the resources to help people recover well and bring them back to a place of wholeness.”
To learn more about Foothill Unity Center, including how to volunteer, donate or sponsor a family for the holidays, visit its website at foothillunitycenter.org.