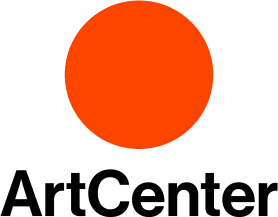 Recruitment “Viewbook,” produced by ArtCenter College of Design’s Marketing and Communications team, recently won top honors in multiple prestigious design contests from around the globe.
The ArtCenter’s 2021–22 “Viewbook,” a highly-visible and promotional publication used to recruit students, received top honors and praise from jurors in the design community as well as from peers in higher education.
The college’s “Viewbook” was selected as one of 50 covers in the “50 Books 50 Covers” competition, which recognized the best work in book and cover design as determined by AIGA and Design Observer. The “Viewbook” was one of 700 book and cover design entries from 36 countries.
Designed by ELLA, a graphic design studio based in Los Angeles, the “Viewbook” was described by judges as “a beautiful, practical keepsake publication, conveying serious design skills and prestige.” They also said, the “book conveys a strong sense of identity and the culture of this school.”
The “Viewbook” design team consists of River Jukes-Hudson and Stephen Serrato. The partners founded ELLA and are both ArtCenter graphic design alumni who teach graduate and undergraduate typography courses at the college.
The two-volume “Viewbook” is one of the ArtCenter’s most important recruitment tools for prospective students. The 2021-22 edition serves three main functions: It conveys the key factors that differentiate the college from its peers; it represents the institution’s core values; and it emphasizes the individual experiences of its students.
Operating from a belief that highlighting only refined final work creates a barrier for some students — by overemphasizing seemingly unattainable results — the 2021–22 “Viewbook” featured an organizing theme of “process” in which text and imagery that focuses more on the behind-the-scenes steps involved in creating a project (sketching, trial and error, discussions and deliberations) was made more prominent.
Elements throughout the publication — visible printing artifacts, covers printed on uncoated kraft cover stock, Swiss binding and exposed smyth-sewn book blocks — all reinforce the theme. Another process that receives special attention is the college’s desire to create a more equitable learning environment — an aspirational work-in-progress whose less-than-flattering history is presented transparently across several spreads of the award-winning “Viewbook.”
Also recognized by the AIGA “50 Books/50 Covers” competition is Public Foundry, a catalogue based on work by 2020 typographers-in-residence Joshua Trees, Yvan Martinez, and Krister Olsson, all of whom were based at the Hoffmitz Milken Center for Typography at ArtCenter for six weeks in 2020.
“Bold use of typography on the cover and aggressively scaled illustrations and type are the defining elements of this book,” said juror Jennifer Morla about the Public Foundry catalogue.
ArtCenter’s 2021-22 “Viewbook” also won a gold award in the Council for Advancement and Support of Education Circle of Excellence competition. These peer-selected and adjudicated awards honor institutions worldwide. Winners are selected based on overall quality, innovation, use of resources and the impact on the institution or its external and internal communities, such as alumni, parents, students, faculty and staff.
ArtCenter’s Dot Magazine feature story “Raising Consciousness: Diversity in Graphic Design” written by Solvej Schou, senior writer in the ArtCenter’s Marketing and Communications Department, was also honored with a CASE Circle of Excellence gold award. The story focuses on the ongoing importance of diversity, equity and inclusion in graphic design and includes interviews with Black, Latinx and Asian recent alumni and a student from the College’s graduate and undergraduate graphic design programs.
“Well done painting a picture with words here,” said CASE jurors about the magazine feature story. “The writer brought the story alive, and caused the judges to reconsider the role of race in design at their own institutions, the obvious hoped-for intent of the writer to begin with,” they continued.
A new branding campaign for the college’s extension program won a TDC award for communication design. The TDC awards recognize typographic excellence and innovation with the art and craft of typography and design. Selected among entries from more than 60 countries, the ArtCenter Extension (ACX) identity and branding campaign pairs a new name and organizational structure with a new visual approach that embraces the theme of creative growth through play and the modular nature of the programs’ a-la-carte offerings. The design team responsible for the award-winning work is Winnie Lee, art director; Scott Taylor, creative director; Alex Seth and Matt Adams, designers; and Audrey Krauss, creative production.