It’s been 10 years since the lethal Station Fire, called the largest blaze in the history of Los Angeles County, menaced La Cañada Flintridge and nearby communities, forcing some local residents from their homes and leaving indelible memories of harrowing days.
The blaze began Aug. 26, 2009, in the Angeles National Forest along the Angeles Crest Highway, approximately four miles north of LCF, and over the next several weeks burned 161,000 acres and killed two firefighters. It was declared fully contained until nearly two months later ─ on the evening of Oct. 16, 2009.

“The city was very fortunate that we did not lose any structures or homes during the Station Fire,” said City Manager Mark Alexander. “However, we did lose two outstanding firefighters in Fire Capt. Ted Hall and Firefighter Specialist Arnie Quinones, who sacrificed their lives protecting ours and our homes.
“We cannot forget their sacrifice, so this is also a time when we should also recognize their heroism and express our condolences and appreciation to their families.”
Hall and Quinones were both members of the Los Angeles County Fire Department. Hall had been assigned previously to a fire camp in the mountains near LCF, and Quinones had previously worked at local Fire Station 82. They had been assigned for several years to a remote mountain outpost to train prison inmates to fight wildfires, and died on Aug. 30 near Mt. Gleason in the San Gabriel Mountains when their truck plunged 800 feet into a steep canyon as the fire bore down on the area.

The cause of the fire was arson and a suspect has not been arrested, said Robert Garcia, the U.S. Forest Service’s Angeles fire chief, who said the blaze is the largest in county history. It remains under investigation by the county Sheriff’s Department and Forest Service Law Enforcement and Investigations, Garcia said.
The crisis’ impact was felt well after the fire, as mudslides in areas denuded by flames damaged dozens of homes in foothill areas amid intense rain.

One change that resulted in part from the fire is that the Forest Service now battles blazes at night.
“Following careful research and deliberation, in August of 2012, the chief of the Forest Service made the decision to implement a Helicopter Night Operations program using one contracted night-flying helicopter,” Garcia said. “The decision to initiate an HNO program is based on extensive risk management, business and operations analyses.”
City Councilman Gregory Brown, who was serving a second term on the Council, said there was criticism about the initial response to the fire because air tankers weren’t immediately called in when the fire was small.
“There was controversy there,” said Brown, adding an investigation later was conducted. “In terms of local response, people are never happy being subject to evacuations. There was that kind of rumbling or unhappiness.”

Pat Anderson, president and CEO of the LCF Chamber of Commerce, said she remembered being told to evacuate her home six times.
“After a period of time, many of us were evacuation weary,” Anderson said. “We’d get an order to evacuate and we’d have to evacuate. And then, the next day, we’d get an all clear and go back home. After you do this a few times, you know you have to do it, but it wears on you. That’s because there were so many unknowns. The fire was spreading, it was intense, and much of the fire, thank God, was in the deep canyons.”
The fire also caused the La Cañada Unified School District to delay the start of the school year by two days, according to a report in The Outlook. La Cañada High School’s north gym was used for evacuees, said current Principal Jim Cartnal, who set up cots there.

Brown recalled that he and other council members traveled to various homes to find out if they had burned down.
“A lot of calls were coming in and a lot of rumors were flying around and confusion over evacuations — what neighborhoods were affected and what weren’t,” Brown said.
In one case, a house was rumored to be on fire at Starlight Crest Drive. When Brown went to the location, he found that the neighborhood had been abandoned and the Fire Department had moved on to keep up with the moving fire. He and a freelance photographer for the Fire Department found a pile of wood and debris near a home had caught fire, though from across the canyon it looked as if an entire house was burning.
“He and I converged on this pile of burning rubble and looked at each other,” Brown said. “We went door to door until we found a garden hose and connected the garden hose. We put out the fire. That was kind of an interesting experience.”
Brown’s own home on Vista Miguel Drive, which runs parallel to Angeles Crest and La Cañada Boulevard, was in an evacuation zone. Firefighters set up a fire line to prevent the blaze from reaching his home as it advanced down a hill.
“It was relatively calm as it came down the hill,” Brown said. “Even though it does make you appreciate the energy of the fire. You could feel the heat up the hillside and it got way more intense.”

The fire, which burned its way down the hillside, came within 150 feet of his house before it was stopped.
“For our part of the fire, it went on toward the west, and burned for quite a ways,” Brown said. “The impact on La Cañada was basically three days. It was essentially 72 hours until it had basically burned past.”
Larry Welk, who owns an aviation services company, said he signed a Sheriff’s Department waiver to stay in his home despite living in the evacuation zone near Gleneagles Place and Starlight Crest in LCF. Welk sent his family to a safer place.
“I couldn’t believe what I was seeing from my own backyard,” Welk said. “It looked like lava flowing toward the house.”
Welk said he decided to stay because he noticed an absence of wind amid the fire.
“Usually, massive fires are wind-driven fires,” said Welk, who has reported on many fires while flying his helicopter on behalf of news organizations. “This one didn’t. … It just had a lot of fuel.”
He said he has a photo that shows him looking down at a 50- to 75-foot wall of flames coming up the hill toward his home.

“That’s the thing most don’t understand,” said Welk, who graduated from LCHS in 1988. “The noise a fire makes. It really does sound like a locomotive. You can imagine lighting a trash can full of newspapers on fire or anyone who has lit a Christmas tree on fire. It makes a noise, but imagine that’s an entire forest burning. The other thing is the heat … you can feel the heat coming much before the fire and smoke.
“Because we were at the top of the hill there were several animals coming out of the forest, running away from the fire. We saw deer and singed rabbits, rats … any of those critters that were out in the forest were now rushing past as the fire made its way up the hill.”
Alexander, who was wrapping up his vacation in Australia at the time but kept in contact with then-acting city manager Kevin Chun and other officials, was frustrated at being unable to help handle the situation and arranged to return early.
“Being so far away, it was essentially a two-day delay and it was hard to tell whether the event would be over or at its worst,” Alexander said.
“Flying back into LAX, once you entered Los Angeles airspace, you could smell the smoke from the Station Fire,” Alexander said. “It was so pronounced that the captain made an announcement that passengers need not be alarmed, as the smell was emanating from the major fire within the Angeles National Forest.”

State Sen. Anthony Portantino, who as an assemblyman authored legislation to give tax credits to residents who lost their property in the fire and subsequent mudslides, said he will never forget that time.
“The fires were just phase one of the tragedy,” said Portantino, an LCF resident and former city councilman and mayor. “The mudslides came through when the rains came through. We did lose significant properties in the mudslides.”
Anderson’s home was devastated in the mudslides, which struck her residence on Feb. 6, 2010.
“The one takeaway that our whole neighborhood in Paradise Valley came to appreciate is that when something like this happens, we are on our own,” Anderson said. “Because Ocean View [Boulevard] is the only way up there and as we had talked about what if Ocean View is blocked for some reason. It was. It was blocked with rocks, trees and about seven automobiles wrapped in a big ball of mud. It took the authorities over three hours to move all that out so they could get up to us. … Fortunately, there were no injuries as a result of this disaster.”

Laura Olhasso, the mayor of LCF at the time, said she felt the city had a strong disaster preparedness plan and procedures in place.
“I think this Fire Department and Sheriff’s Department did an excellent job communicating with each other,” Olhasso said. “We did have [firefighters from] over 100 different fire departments from all over the country. I know because I wrote a thank you note to each of them.”
Olhasso, who vividly remembers seeing more than 100 fire vehicles parked along the perimeter of LCF amid the effort to keep flames from reaching the city, said the community gathered together to take a photo in Memorial Park in mid-September with a large sign thanking firefighters and law enforcement. The photo was part of the notes she sent to fire departments from Alabama to Alaska.

“It was amazing where these fire departments came from,” Olhasso said. “I remember the [county] Fire Department told us if there had been any wind, the next line of defense was the 210 Freeway. We would have lost half of our town. That’s a daunting thought. Because it was so slow-moving, when it got closer to homes, the Fire Department waited. They could stand on someone’s roof and wait for the fire to get close to put out. They had the luxury to do that because there was no wind.”
Olhasso recommended that residents make sure to have more than one way out of their homes if another fire strikes and to evacuate the residence when told.
“Do not make any fire or any public safety personnel put their life at risk because you’re still hanging around,” Olhasso said.
Alexander said the Standardized Emergency Management System, the emergency response protocol used statewide and by LCF, helped the city deal with unanticipated issues from the fire.

“It works,” Alexander said. He added the city’s evacuation protocol during the threat of rainstorms and mudslides was also effective. The system issues rainstorm warnings, evacuation information and the circumstances in which residents can return to the neighborhood.
“This protocol worked very effectively and was subsequently shared with other San Gabriel Valley cities following their own hillside fires so that they didn’t have to reinvent the wheel,” Alexander said. “We have looked at advanced planning for our evacuation routes. These, too, have to remain flexible dependent upon where the immediate threat is emanating from and other factors that might shape the response or evacuation. It is an evolving system but if you can anticipate it, you can plan for it.” 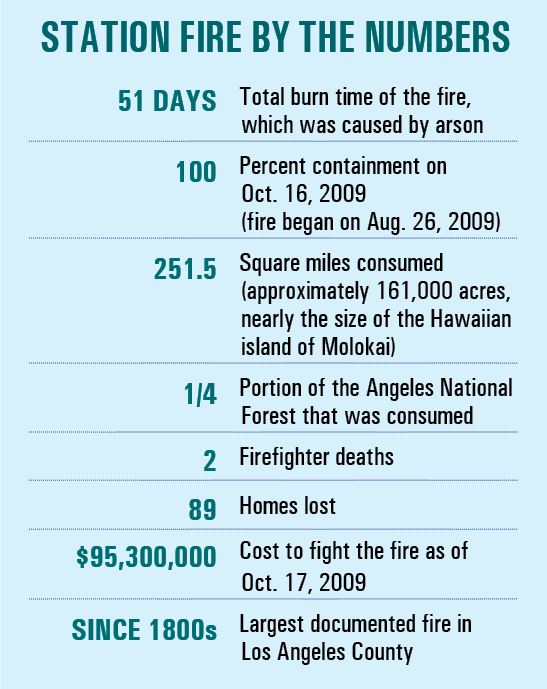