However, there is one specific title that has prompted numerous reunions among the players and recognitions from the school.
“In 1979, I was in my first year as [Associated Student Body] director and it was a magical year,” said Jim Harvey, who retired from teaching at LCHS and has been the public address announcer for Spartan football games for more than four decades. “La Cañada won the CIF championship in football and that was a dream come true.
“The program had some ups and downs and that [CIF title] really put us on the map. It’s one of the most significant wins in school history. Nothing electrified the community like that. We never had experienced anything like it.”
Harvey joined the team’s players and coaches as they recently celebrated the 40th anniversary of La Cañada’s first and only CIF-SS football championship at Oakmont Country Club in Glendale.
On Dec. 14, 1979, a talented Spartan team defeated host Lompoc, 21-7, to capture the Northwestern Conference championship. La Cañada finished the season with a 12-0-2 record and was the only undefeated CIF champion that year.
“It’s kind of surreal,” said Marty McWhinney, who was the Spartans’ head coach from 1976-80. “Forty years have gone so fast, but then you talk with a guy you haven’t seen in 10 or 20 years and it’s as if no time has passed. We built a wonderful bond together.”
That bond was evident at Oakmont as nearly 40 former players and coaches reminisced about each victory, accomplishment and accolade. 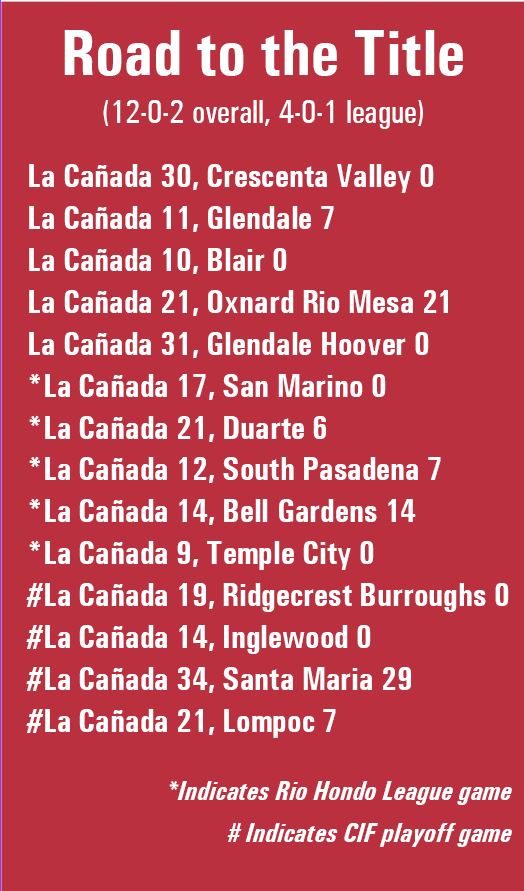 “Seven shutouts and 91 points over 14 games,” Mike Dansby said after introducing himself as the team captain and one of the linebackers.
That was what La Cañada’s stout defense boasted in the 1979 season; a staggering 50% of the Spartans’ games were shutout victories.
“I’m very proud of it,” he added.
Dansby and the rest of the team take great pride in what they achieved because LCHS wasn’t known for football.
“We feel like the Miami Dolphins, the only undefeated team in the NFL,” said All-CIF cornerback Chris Myers, who went on to play at Harvard. “I really think it’s a special thing. The timing was perfect. It all came together with the senior and junior classes. They were both really talented groups of people who brought different things to the table. The juniors were great athletes and the seniors were good leaders. That’s what led to a CIF championship.”
McWhinney credits the leadership from the 1977 and 1978 seasons for the change of attitude and culture.

“One of the reasons they had a chance to be so successful is two or three years before them winning, there were a bunch of guys who bought into the program,” McWhinney said. “They didn’t win much in 1976 and 1977, but then in 1978 we turned it around and got into the playoffs. Those guys broke some bad habits. I came from a successful program in Pico Rivera El Rancho. We just tried to do the same thing [at La Cañada]. We didn’t win a lot in the beginning but they put in the work. Because of that, we got a little better each year.”
As the team improved, the players worked harder. They practiced every day during the summer, went on long runs at the Rose Bowl and lifted weights together. Everyone put in the effort, giving the coaches and team confidence as the 1979 campaign approached.
“Going into that season, we weren’t thinking about winning most of the games and winning league,” said Dansby, who was an All-Rio Hondo League first team linebacker. “We were going to win CIF. No doubt about it.”
That determination was evident from the get-go as La Cañada opened the 1979 campaign with a 30-0 rout over Crescenta Valley, followed by an 11-7 victory over Glendale.
“When we beat Glendale in a close game, it felt like the hard work in the offseason was paying off,” said Myers, who was an All-CIF first team defensive back. “It gave us a lot of confidence. The key to our team was the defense, which was phenomenal.”
That defense went on to record another shutout in the third week in a 10-0 win over Pasadena Blair. The Spartans tied Oxnard Rio Mesa and Bell Gardens and posted wins over Glendale Hoover, Duarte, San Marino and South Pasadena. La Cañada closed out the regular season with a 9-0 victory over Temple City.
“Temple City was the team you always had to get by back in the day,” Dansby said. “When we beat them, that’s when I thought, ‘OK, this is real. Here we go.’”
McWhinney’s team showed no postseason jitters and blanked Ridgecrest Burroughs, 19-0, in the first round. The No. 2-seeded Spartans continued their winning in the quarterfinals with a 14-0 win over Inglewood.
La Cañada’s biggest test of the season came in the semifinals when it took on third-seeded Santa Maria, the champion in the competitive Northern League. The Saints had defeated Bell Gardens, 22-9, in the quarterfinals, the same Bell Gardens team that tied LCHS, 14-14, during the regular season.
“That was the big game,” Harvey said. “In a way, that was the championship game because Santa Maria was the team to beat. That was the only team to put up points against La Cañada.”

The Saints entered the game with a stellar offense, and it showed as they erased a 21-7 deficit against the Spartans. Santa Maria scored early in the fourth quarter to take a 29-28 lead and had broken a La Cañada defense that entered the semifinal allowing just four points per game and having recorded seven shutouts.
The Spartan offense rose to the occasion in the final quarter as All-League tailback Pat Tenney and quarterback Rob Hause led La Cañada downfield. Hause capped a 52-yard drive with a touchdown late in the game, giving the home team a 34-29 lead. LCHS held on for the historic victory, sending its 4,000 fans into a frenzy.

“We always thought we were in better shape than our opponents,” Myers said. “We believed if we kept it close in the fourth quarter, we’d win it. We won a lot of close games. It’s not like we were blowing people out. We were just better conditioned, in better shape, better trained and well coached.”
The Spartans moved on to face Lompoc in the championship. However, McWhinney gave his team some rest after a grueling semifinal.
“After winning that game against Santa Maria, we were just spent,” he recalled. “We were psychologically, physically, completely spent. It took three or four days for us to get back into action.”
The Spartans marched on with the CIF championship on their minds, and traveled to Lompoc determined to achieve their goal. They were joined by 13 rooter buses, packed with LCHS students and parents, that left La Cañada midday for a nearly four-hour drive to Lompoc for the game on a Friday evening.

Captains Tenney and Dansby walked out of the locker room holding hands, with all of their teammates behind, hand in hand, demonstrating a bond that remains unbroken to this day.
“We walked out holding hands, all 60 guys,” Dansby said. “It made quite a stir. Pat and I looked at each other and thought, ‘We got this.’”
The host Braves tried to make their own statement by putting a touchdown on the board. McWhinney turned to Dansby and asked him, “What just happened?” The senior standout let his coach know it wouldn’t happen again.
“Don’t worry. That’s all they’re going to get,” Dansby said. “I knew it from the bottom of my heart that it was all they were going to get.”
The captain and his teammates came through on that promise and rolled past Lompoc, 21-7, to capture the CIF-SS Northwestern Conference crown in front of a crowd estimated at 10,000.
“That 1979 team had such great leadership in Tenney and Dansby and the whole senior class,” said Harvey, who previously served as LCHS athletic director. “The junior class added great athletic ability. It was the perfect storm, the perfect combination.”
The Spartans from 40 years ago are still the lone undefeated football team in six decades at LCHS. In addition to capturing the league and CIF-SS Northwestern Conference titles, they were also awarded the mythical state divisional championship for medium-sized schools by Cal-Hi Sports, a publication covering high school athletics in the state.
Four players continued their careers in college: All-CIF lineman Craig Falkenstein received a full-ride scholarship to Cal, tackle Brian Hauenstein earned a full ride to Boise State, lineman John Paton played at Utah, and Chris Myers played at Harvard.
LCHS athletes also received significant postseason recognition, with 20 players becoming All-Rio Hondo League selections, including 10 on the first team.
“It’s one of the highlights in my life,” McWhinney said of the season. “I have two beautiful daughters and grandkids. All of these men are part of my life because we really accomplished something significant together.”