Two days ago, as high school seniors from Burbank and John Burroughs prepared for their virtual online graduation ceremonies, parents festooned the fences of the two schools with signs and decorated their cars with balloons, photos, flowers and streamers. They then chauffeured their member of the class of 2020 around the perimeter of their respective schools to the cheers of family, friends, staff and faculty members.
The events were both joyful, but it was not the way things were supposed to be.
This was the week when seniors from Burbank and Burroughs, donned in their respective blue and red mortarboards and gowns, were to have taken receipt of their diplomas and then proudly flipped the tassels of their caps to the left side as a sign that one chapter of their lives was closing as a new one begins.
The COVID-19 pandemic robbed them of that milestone, and although many of the seniors from Burbank’s two public high schools are harboring sadness in missing out on their commencement ceremony, prom, and the other rites of passage that come with the completion of the final stage of secondary education, their ingenuity and creativity, coupled with that of their schools and parents, have provided them with memories that, while not traditional, will be unique.

“It’s bittersweet,” said Joseph Ojeda as he affixed a sign adorned with a rose, hearts and a message of congratulations to his daughter, Sophia Rose Ojeda, on the fence at Burroughs. “I know she has tried to be positive about all of the events that have been canceled and what they have missed out on, but when she watched former President Obama give his address on television [last week] her emotions just got the best of her.”
Saying he and Sophia Rose’s mother, Rose Tronsco, are planning on throwing a big party in their daughter’s honor, Joseph shrugged as he stepped back to make sure his sign was straight. “I’ve been telling her to look for the silver lining,” he said. “I tell her that these pandemics only come around every 100 years, so she should revel in the different memories she will have of her senior year.”
Burroughs seniors Erin Collins and Dylan Beverly said they have been struggling with mixed emotions over the final months of their high school careers.
“There are ways to stay positive about it all,” said Beverly, who will be studying economics at Pasadena Community College this fall. “But sometimes they’re hard to find.”
Collins, who will be matriculating at UC San Diego, where she will be majoring in human biology, agreed with her classmate. “We do feel robbed of so many experiences, but I think the biggest thing that is hard to deal with is that there was no chance for us to say our goodbyes. There was no closure,” she said.
Dylan’s father, Scott Beverly, said it has also been hard for him and his wife, Sandra, to see their son and his classmates miss out on such an important tradition. “Seeing our kids sent out into the world without the traditional rituals and events is really difficult,” said the elder Beverly. “When I was a kid we had to know how to duck and cover and had fire drills, but that has all changed. Today the kids are dealing with things we could have never imagined. But the school is doing its best, and I know this class will go on to do great things with memories that, while not traditional, will be ones that will make them stand out.” 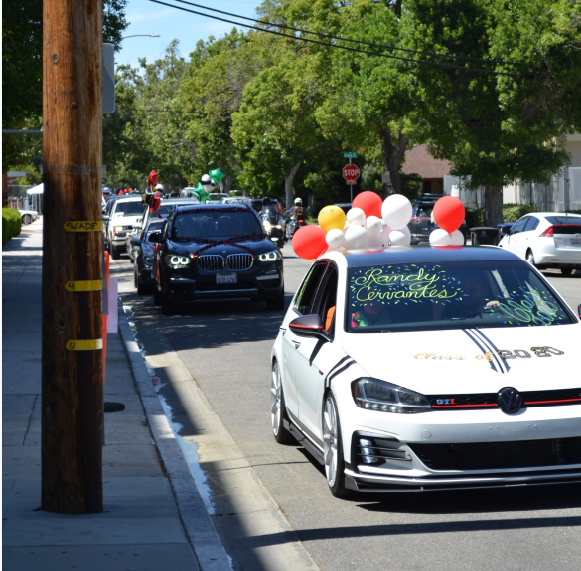 Burroughs Principal Deborah Madrigal said the past two months have brought about mixed emotions with everyone — staff, students and parents.
“Although this has been difficult for all of us, I have found most people are making the best of it and have been offering help to one another and showing all kinds of acts of kindness and compassion,” said Madrigal. “I have also found our seniors to be appreciative of what we have been trying to do — kicking things up a notch in any way we can because they are missing out on so much. But we’ve all gone through the gamut of emotions, especially in not being able to say proper goodbyes.”
Asked to preview the words she would leave with the class of 2020 in her virtual address, Madrigal shook her head.
“It isn’t about what I will leave them; it’s about what they have left me,” she said. “They are a group of kids like no other I have seen in my career. Yes, they are sad, but they are the most resilient kids I’ve ever seen. Their senior year and graduation will be unique, not just because of the pandemic, but because they are so unique. They have grown up with a very different perspective on life and the world. They were children when the financial crisis of 2008 hit, so they went through that, and they don’t know anything other than having active shooter drills and living in a world with divisive political upheaval.”
Saying she believes there are parallels to be drawn between the class of 2020 and kids who graduated during the most turbulent years of the 1960s, Madrigal said there is one big difference that she sees.
“These kids care about the future, but they live in the moment and appreciate the present,” she opined. “They want to work together to figure things out in ways they don’t see happening in the world today. They are planners who have created boards that discuss issues of all sorts. They are so action-oriented and organized.”

Over at Burbank High School, Lindsey Miller, who is the fifth child of Joey and Brenda Miller to graduate as a Bulldog, embodied the resilience the principal of their crosstown counterparts spoke of.
“Of course we are sad that things didn’t work out the way we planned, but that’s alright,” said Miller, who will be matriculating at San Jose State University, where she will major in psychology. “When the time comes that we can all get back together there will be so much joy and love, and our reunions will be so special because we will always be a special class with special memories. We will always be unique.”
Brian James, who serves as the assistant principal of athletics and facilities at Burbank High School, said the positivity of Miller is one he has seen with many of this year’s seniors.
“This has been a real challenge for our seniors — all of our students — as well as for staff,” said James. “I recognize the emotional strife our students are dealing with, and the concerns our staff has with the inequity associated with online education.”
Explaining that every household is different as far as the levels of parental support and resources that are provided, James called classroom education a place where the playing field is level.
“On campus, students receive the same faculty support and resources,” he said. “That is not true in homes, and we do have concerns that there will be inequities that will have an impact on some students’ education. We have also missed the human connectives. Zoom is a great tool, but it will never be the same as having personal contact with one another. And yet, in spite of all the challenges the pandemic has brought about, our students, and especially those in the class of 2020, have maintained a great attitude. They are a special group of kids, and there is no doubting the fact that they will go out into the world and do tremendous things.”