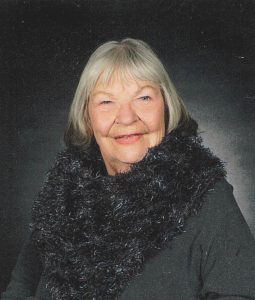 Our community lost a rare treasure on Monday, March 2, 2020 when (Edna) Jean Raun passed from this life. Jean died just shy of her ninety-seventh birthday (April 13), but she didn’t leave before accomplishing everything that one person could do to defend the worth and dignity of all people.

Jean was a Kansas City native, a proud Jayhawk, who grew up during the Depression. Her Papa once told her, “God made a wonderful world, and we need to go out and appreciate it.” Jean took this advice to heart and moved to California in 1953 with her first husband and their three beloved children. When this marriage ended in the early 1960’s, Jean moved her family to Laguna Beach. She met and married Dick Raun, the love of her life, and they shared fifteen years as kindred spirits before his death in 1981.

Jean’s passion was social justice, and she pursued every opportunity that arose to advocate for the power of good government to affect positive change in the lives of all – but especially in the lives of those with the least among us – the poor, the homeless, and the mentally ill. Jean lived by the courage of her convictions speaking out and taking action to move people beyond their own self-interest in order to achieve a common good.

The Unitarian Universalist Fellowship of Laguna Beach (UUFLB) was Jean and Dick’s spiritual home and the forge that inspired Jean’s activism. She served as Social Services and Social Justice Chairperson for the UUFLB’s Social Action Committee. If you were fortunate enough to have attended the UUFLB on the Sunday before Labor Day each year, you would have found yourself singing along with Jean as she led anthems in honor of the working men and women whose sacrifices led to improved conditions in America’s workplaces.

When Jean retired in 1986 from her career as a middle school teacher of Social Studies, she joined the League of Women Voters (LWV) of Orange Coast. She would become a potent force in the LWV serving as the Co-President of the Inter League Organization responsible for all LWV activities within Orange County. She was past President of the LWV of Orange Coast, as well as serving as the long time chairwoman for the Laguna Beach Unit of the LWV.

During the decades of her work on behalf of the LWV, Jean provided non-partisan voter education in the context of “Pros and Cons of the Ballot” informational discussions, candidate forums, and various public meetings dedicated to serving voters so they might become a better informed electorate. Jean was instrumental in bringing a Campaign Finance Reform proposal to Laguna Beach in 1994 that resulted in a campaign contribution limitation still in force.

Jean was a founding member of the Board of Directors of the Laguna Relief and Resource Center, tasked with serving the needs of the less fortunate as well as providing humanitarian disaster relief for Laguna Beach. She was a compassionate and enthusiastic volunteer feeding, listening to, and acting on behalf of anyone needing help. Somehow, Jean also found time to organize and lead Great Decisions, a community based discussion group that met in Laguna for many years. Sponsored by the Foreign Policy Association, these groups brought a basic understanding of foreign policy decision making to the general public.

Jean also served for many years on the Orange County Interfaith Council helping bring people together from various faiths/agencies to address the needs of the poor, sick, and disenfranchised. The Woman’s Club of Laguna Beach and Laguna’s Cross Cultural Council counted Jean among their long-time members. Jean was the Woman’s Club of Laguna Beach’s Woman of the Year in 2007.

Family was the kindling for the sparkle and joy so evident in Jean’s presence. She leaves behind her three beloved children; daughter Susan (Frank Bentley), son Bob Chamberlain, and daughter Rebecca (Becky) Chamberlain. Jean’s loving embrace was spacious enough to hold six grand children, twenty-two great-grand children, and four great-great-grand children. During the final years of her life, Jean relied on the loving care of her son Bob, her daughter Becky, and her grandson Jamie, along with his wife Cindy, to make it possible for her to remain at home – angels all.

The energy of Jean’s profound empathy and compassion will continue its outward expansion. She was extraordinary. She was loved.