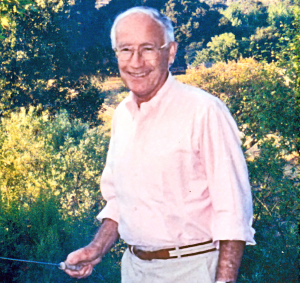 Frank Woodhill Jameson passed away peacefully on the morning of December 27, 2020, at his home in San Marino, CA. He leaves behind his wife of 58 years, Barbara, as well as a son, Bill (Patti), a daughter, Ruth (John Pasqualetto Jr.), and six grandchildren; Will, Brady, Charlie and Maggie Jameson, and Matthew and Carolyn Pasqualetto.

Born in England on October 14, 1929, and raised in Corona, CA by Eloise Jameson, Frank attended Menlo School in Atherton, CA., Stanford University and Stanford University Law School. While at Stanford, he joined the Stanford Crew team and remained committed to supporting the program for many years following his graduation. After law school, Frank served in the Air Force as an officer in the JAG Corps. Settling in Southern California after his time with the Air Force, Frank took advantage of the Engineering degree(s) he earned at Stanford and began working for SDI where he joined a team developing the technology to successfully launch missiles from submerged submarines. From pyrotechnics, Frank returned to his roots in the citrus industry, working for The Jameson Citrus Company in Corona, CA.

In 1961, Frank met Barbara Stewart in Pasadena, CA on a blind date, and the two of them were married on May 4, 1962. Frank and Barbara raised two children in San Marino, and in between sporting events, Scout trips and horse shows, Frank was able to pursue his two favorite hobbies – “tinkering” in his garage and making Jameson travel plans. Over the years and with help from many friends, Frank restored a 1929 Ford Model A pickup truck, a 1943 Willy’s Army jeep, and a 1949 Cadillac sedan. He also refurbished and upgraded a 1966 Ford Thunderbird, a 1965 Ford Mustang and a 1948 8N Ford Tractor. As a child, Frank traveled to India and other distant lands. This background clearly made its mark as seen in the many family trips that Frank planned and executed over the years. There were trips to the UK to see relatives and (too many) castles, Sweden to visit family friends, Austria to rent a castle for most of the summer and explore neighboring countries, and finally summer beach trips to La Jolla Beach & Tennis Club, as well as Newport Beach.

Frank’s commitment to family and friends was evident in everything he did. Socially active, Frank served as the President of the Valley Hunt Club in 1993, a member of the Pasadena Investment and Trust Association and Corona Rotary. With respect to his family, Frank was the ultimate patriarch, ensuring that his wife, children and grandchildren were always properly taken care of.

After 91 years, Frank Jameson leaves behind a legacy of fond memories with all of those that he touched during his life. He was a true gentleman, a friend, a mentor, a husband, a father and a grandfather like no other.

A private family service will be held at the San Gabriel Cemetery later this month. In lieu of flowers, donations can be made to Huntington Memorial Hospital.