Like many children in the foster care system, Tencha Nieves grew up in a lot of different places.
She tries to remember them all, but having been in the system since she was 2, it’s hard. There was her grandma’s home, she recalls, then her aunt’s, but four children were a lot and that’s when the siblings were separated. Sometimes Nieves lived with her twin and another brother, but sometimes not. There were individual homes and there were group homes. There was the time when she thought everything was going OK with her foster guardian, but she came home from a barbecue and was told to pack her bag. That one still hurts.
But all in all, Nieves, 22, who graduated from Pasadena High School, still has a positive outlook.
“Even though I was in foster homes, I had a pretty good life. I got a good support system and lots of friends,” said Nieves, who is now enrolled at Los Angeles Harbor College and studying to become a paralegal.
She’s had support along the way from foster care nonprofits and as a young adult, especially, from
Hathaway-Sycamores Child and Family Services, which has helped her find independent housing in Covina. An organization with deep roots in the Greater Los Angeles area, Hathaway-Sycamores has helped 125,000 individuals during the past two decades.
“I love Hathaway, they’ve helped me grow so much,” Nieves said. “I’ve had so much guidance in simple things, helping me with food [programs], getting into college and enrolling in my classes, plus the youth specialists are always there to help us.”
Nieves has become part of the family at Hathaway-Sycamores and its Transitional Age Youth program and wraparound services, which have served nearly 800 youth since the program’s inception in 2000. TAY provides support for foster youth like Nieves as well as youth on probation who are being emancipated from group or foster homes, filling a critical need for housing and supportive mental health services for young adults ages 18-24 as they make the transition from foster care placements to adulthood and independent living.
Many in this population are at risk of homelessness, noted Hathaway-Sycamores CEO Debra Manners, who added that the nonprofit is intent on creating more avenues to help young adults like Nieves. As part of the nonprofit’s three-year strategic plan, it has secured a mix of funding to build permanent supportive housing near Pasadena. That complex could hold up to 40 individual apartments to house young adults older than 24.
“Typically, all of the youth in foster care have experienced severe trauma. Some youth can recover and live on their own and be independent, but for others that’s not the case,” Manners said. “For the former foster youth who have mental health issues that will be lifelong [including severe bipolar disorder, psychoses and depression], they need a continuum of care.”
Manners emphasized that Hathaway-Sycamores is not just housing youth. It’s helping to raise youth, if you will, with programs that focus on sustainability: how to cook, manage money, stay healthy. Things a parent might teach children. 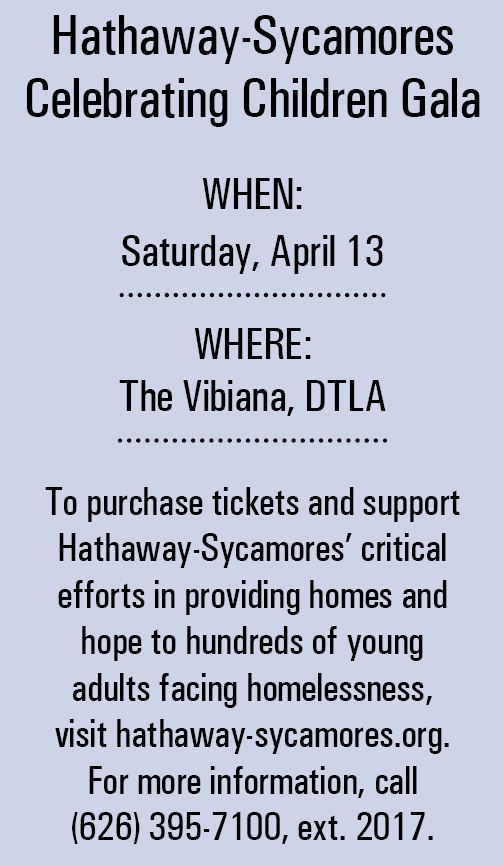 “Our staff who work in the program enjoy the work they do so much, they never leave. It’s like a big family. The youth come back and we have big dinners and celebrations,” Manners added.
Samuel Gonzalez, vice president of supportive housing at Hathaway-Sycamores, is one of those staff members who loves what he does. He came back to the nonprofit specifically to work again with the foster or former foster youth.
“You have to love what you do here, or I don’t think you’ll be very successful. The kids will see right through you,” Gonzalez said.
Gonzalez said the TAY program focuses on teaching youth what they need to live on their own for the first time. That encompasses what any young adult goes through on his or her way to independence, he noted.
“We let them make mistakes with us and fail with us, and then we help them pick up the pieces, so to speak, to learn how to adjust to living in society on their own,” Gonzalez said. “Most of the kids we work with are institutionalized by the system, for lack of a better word, in group homes their whole life or in juvenile detention. They come out of that whole system … they just didn’t get the adequate love and support that they might get with a family.”
Hathaway-Sycamores currently houses about 150 youth, the majority in two-bedroom apartments, which are leased to the nonprofit. The apartments are near college campuses and public transportation, and are largely situated in complexes that house everyday families and people from all walks of life, he noted. The nonprofit’s housing model for supported independent living uses a “scattered site” approach, in which each youth and a roommate share a two-bedroom apartment with subsidized rent on a graduated schedule over a two-year period. Other financial assistance includes bus passes and food vouchers.
Many of the youth experienced a lack of permanence, stability or consistency of care, experiences that can result in a lack of trust in adults and defiance or anger toward life. Although they may enter the program anticipating reasons to fail, they leave with confidence and hope because they’ve developed fundamental life skills, a history of employment success and a foundation for further educational achievement. Emancipating youth establish healthy relationships, using skills including “vetting,” help them draw strength as they take steps in building their lives, Gonzalez added.
“We allow anyone to come into our program, we serve 100% of the population that comes to us,” he said. “We don’t push school unless somebody wants to go to school, and then we help make that happen for them. They are the driver of their life and we just want to be here for a part of it. This is a practice round so we want them to practice and fail with us as much as possible.”
Some of the youth leave the program —after multiple warnings — if they’re not able to abide by the rules of their living complex, which might include noise or smoking restrictions. That’s not ideal, Gonzalez noted, but often that young adult will come back with a different attitude after some time away.
“These kids never had a head start,” Gonzalez said. “Many were learning things at 18 that other kids were learning at 14. So scholastically, developmentally and occupationally, they’re not at the level that society wants them to be at age 21. So we need programs that allow us to be the parents, allow the kids to make mistakes, and support them and help them pick themselves up when they’re losing a job or help them maintain motivation for when they feel terrible about their life.”
The nonprofit’s support staff is the backbone of the program, Gonzalez noted. That team comprises a youth advocate, case manager, emancipation clinician, youth advocate manager and program manager, who all work with the youth to identify goals and develop a strategic plan to achieve them. The team supports them through mentoring, coaching, therapy, case management, workshops and outings.

Nieves said she loves her support team, members of which have come over in the evenings at the drop of a hat just to give a listening ear. Seven months pregnant, Nieves is focused on finishing school in the next year. She’s well aware she’ll have to exit the program by 24 and needs a decently paying job by then to support her baby.
“[Gretchen] was my first youth specialist and [Stephanie] too … they are awesome and always helpful. Basically, they just help us survive. I can always talk to her and she always gives me words of encouragement,” said Nieves, who recently threw a baby shower for her little girl, whom she plans to name Ta’Loni.
Over the last two decades, Hathaway-Sycamores has helped 125,000 individuals and is now one of the largest providers of mental health services in Los Angeles County, after it merged two leading child welfare organizations. Today, Hathaway-Sycamores encompasses services that include a residential treatment center for youth 6-18; foster care and adoption services; school based and outpatient mental health services; wraparound and in-home counseling services; transitional living program for teens and young adults; a family resource center and a grief and loss center for children.
For Nieves, although she loves her apartment, the career counseling, and even on occasion, the therapy, her favorite part of the program has been the people.
“I think they set us up so well in the program that when you age out, you have a lot of resources. They’ve helped me with so many things, things they don’t teach you in a group home. I know who I am now as a person … I could never repay them,” she said. “I wouldn’t be half the person I am today without their support.”