Pleading with their audience not to forget the horrors inflicted by Nazis during the World War II era, two Holocaust survivors recently shared their stories with about 400 people at the La Cañada High School Auditorium, including LCHS 7/8 students.
La Crescenta resident Leon Prochnik shed tears frequently as he recalled how his family, which he said owned the second-largest chocolate factory in Poland, escaped from its homeland to safety in Lithuania, then to Japan and Canada.
“It was a life-and-death drama,” Prochnik said. “I didn’t know the murder part, because that’s not what my parents talked to me about. My sister knew there was a great danger of that” — of the dangers of Jews being killed at the hands of the Nazis.
Trudie Strobel, a resident of San Marino, vividly remembered Nazi soldiers who held rifles and yelled “You dirty Jews” to her, her mother and others while pushing them into a cramped wagon carrying them to a displacement camp.
“All I could see were shiny boots and the dogs’ teeth,” said Strobel, who was 5 at the time. “I just lived in fear. As we entered the wagon, it had an odor. They must have swept it, but it was a smelly place. There was no room to sit down. We were not given any water or food. A pail in the corner could hardly be used. Some people got sick and vomited.

“When you vomit, after a while the odor, the stench, gets to you, but nothing could be done. And we were in here two days. Two days of hunger, fear, not knowing where we’re going to go, not knowing the next minute of life.”
The speakers were part of the program “Beyond Fear, Resilience, Resistance and Bravery: Stories of Trauma and Tragedies Through the Holocaust” held at the LCHS Auditorium. Temple Beth David Religious School offered the program in collaboration with LCHS 7/8.
LCHS 7/8 Principal Jarrett Gold said students were getting ready to read “Anne Frank: The Diary of a Young Girl” and this was a valuable opportunity to learn from Holocaust survivors firsthand. Gal Kessler Rohs, an LCHS parent and education director for the temple’s school, had approached Gold about making the event possible.
“These are tough stories they’re telling,” Gold said to his young audience. “Be patient, be quiet, be respectful. It’s a privilege to have these people here. I think it’s lucky for you guys to hear this. Unfortunately, as time goes on, these stories are being lost, and I think it’s important we hear these stories.”
Rohs, who said students had a duty to listen carefully, explained how Adolf Hitler helped start the Nazi Party. He began World War II in Europe by invading Poland and was key to the Holocaust, in which 6 million Jews died. Three students and organizers lighted six candles before the program began. 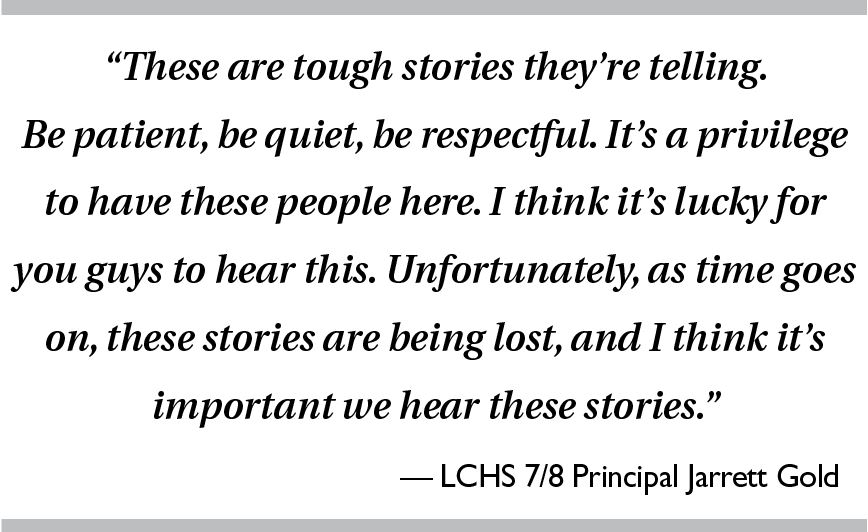 “Now, when Hitler came to power, he started his party called the Nazi Party, or Nazism, which basically means anything that was not pure German blood has to be exterminated,” Rohs said. “In 1933, before World War II, Hitler started this notion of ‘Let’s mark the Jews to show they’re a threat.’ Here’s what he did: In an attempt to mark the Jews and present them to be threats, he labeled them, he put stars on them, he put stars on their stores … and then stores closing down and a lot of bullying and a lot of physical hitting and all of that rose and rose and rose and increased.”
Rohs said being called a threat meant Jews were isolated and eventually put into secluded places, ghettos, where they were denied basic necessities.
“They were basically like prisons,” Rohs said. “They were told they were going to these ghettos where they wouldn’t be mocked and threatened anymore, and instead of that would have a wonderful life.” Rohs said those held captive in the ghettos were transported to concentration camps, where they would probably die, or to labor camps to work, like Strobel’s mother.

Prochnik recalled when he and his family were escaping from Poland in a hay cart and they were stopped at a German post.
“The helmets, the clothes were very scary, even to a 6-year-old who didn’t understand the politics,” Prochnik said. “I understood they were not friends.”
He compared his family’s struggle to reach safety with that of current immigrants seeking to cross into the U.S.
“We say, ‘Those poor Mexican farmers, they have to smuggle people to survive,’” Prochnik said. “Well, you don’t have to be a poor Mexican farmer. You can be a privileged Jewish chocolate maker and still try to survive.”
Prochnik asked organizers toward the end of his talk for more time to tell his story and even asked the young audience if they wanted to hear more.
“Sorry, I apologize from my heart. This story has to be told,” he said to cheers and applause. “There are so many who have done special, powerful work on behalf of the Holocaust. I’ll speed it up, but I’ll tell the whole story.”
Strobel, who warned the audience to beware of white supremacists, told the audience to never forget the Holocaust.
“There could be 6 million people killed because of who they were and what religion they had,” Strobel said. “So please remember, OK?”
The presentation made a strong impression on some students who spoke with The Outlook.
“It was extremely interesting and it was very heartwarming that they were able to escape alive, and these stories need to be passed on,” said Sophia Tripathi, 12, who is in the 7th grade.
Nicole Adamian, 12, said the stories from the two survivors were very inspiring.
“It was a great story for such a devastating event,” said the 7th-grader. “How they were so young and how they had to deal with all the horrible things.”