The city’s recently published homeless count report indicated that, as of January, the city was continuing its generally downward 10-year trend.
However, the COVID-19 pandemic that shut down large portions of California’s economy starting in March leaves a large asterisk on this year’s report and may have undone the progress made since last year.
From this year’s survey, which was conducted overnight on Jan. 22, there were 169 homeless people counted in Glendale, which is 74 fewer than the 243 noted in the 2019 survey. This represents more than a 30% decrease. 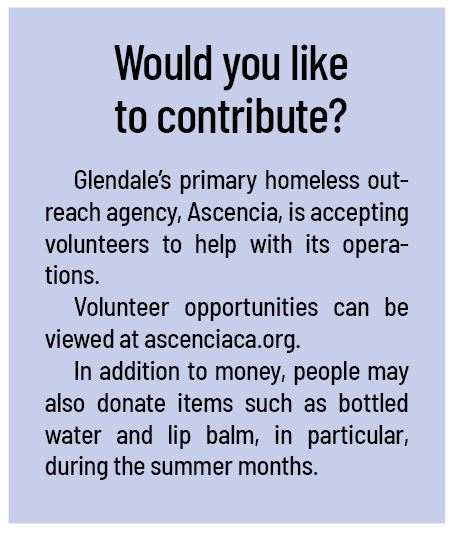 However, Laura Duncan, the executive director for Glendale’s continuum of care agency, Ascencia, said since the pandemic-related shutdowns in March, said the situation has become worse for the community’s most vulnerable.
“Between our street outreach team and the Glendale Police Department, together we’ve already contacted about 70 more homeless folks in the community between March and May,” Duncan said this week. “We haven’t even counted June yet. People are really starting to lose their jobs and housing.”
Of the 169 counted in January, 56% of the subjects, or 94, were sheltered — meaning they were either staying in an emergency shelter or transitional housing at that moment — with the remaining 75 people residing unsheltered in parks, underneath bridges, vehicles or abandoned buildings. Around 38% of surveyed individuals (65) had children, which represents a 19% decrease from last year.
In terms of age range, 42 of the people were younger than 18, seven were 19-24 and 120 were older than 25; 21 people in that latter group were older than 65.
Of the 127 adults surveyed in Glendale this year, 38 of them were experiencing chronic homelessness, which was a decrease by half from the prior year.
The total number this year is a significant drop from 2010’s survey, which noted a 10-year-high of 428 homeless people in Glendale. Though the overall count has fluctuated every year since then, the average has trended downward since. The 169 this year is the second-lowest since 2010, with 168 homeless people counted in 2017.
In its report, the city acknowledged the gains it had made year-over-year, but also noted that the COVID-19 pandemic likely represents an unwanted accelerant to Los Angeles County’s ongoing homeless crisis.
“Despite this decrease, it is unclear whether we may see an increase in the number of homeless due to the current COVID-19 pandemic,” the report read. “Loss of employment has always been one of the primary factors contributing to homelessness in the city of Glendale; therefore, homelessness may escalate if the unemployment levels remain higher than the long-term average. Per the Bureau of Labor Statistics, the California unemployment rate is at 15.50% as of April 30, 2020, compared to 5.50% last month and 4.20% last year. This is significantly higher than the long-term average of 7.20%.”
Duncan, whose agency offers a wide range of comprehensive homeless outreach services, noted that Glendale has been proactive as a city in preparing to address its homeless population. The agencies have been able to collaborate to offer permanent supportive housing, which Duncan credited with steady decreases in the homeless population since 2010.
“That’s one of the significant reasons for the drop-off. It’s a really, really effective program,” she said, noting that L.A. County’s total count jumped by more than 13% year-over-year. “The most vulnerable person is going to need not only a housing voucher, but to get that voucher with ongoing supportive services, basically the case management and social work needed to get them stably housed.”
The full report can be reviewed on the city’s website, glendaleca.gov, within the Community Services and Parks tab, under Homeless Services.
Since the pandemic has hit, the city has implemented a moratorium on evictions designed to protect residential tenants who have lost jobs because of the pandemic and cannot afford to pay rent. Additionally, it recently unveiled a rent relief program that asks affected residents to apply for assistance.
Still, it’s clear that the pandemic has put more people out of their homes, in spite of myriad tenant protections throughout the county, according to Duncan. She did note that the majority of homeless people her agency works with here are not originally from Glendale.
Nevertheless, the city does include residents and families considered especially vulnerable to housing disparities. Per the city’s report, nearly 15% of Glendale households have income levels below the federal poverty line.
“It only takes one circumstance to put them over the tipping point,” Duncan said grimly. “Now with the pandemic, they’re showing up.”