Ruth Mary Turpin was born in 1935 to Ruth and George Bless of Pasadena. She lived the majority of her youth on Rubio Drive, Altadena, at the base of Mount Wilson, with her two brothers George Bless Jr. of Cincinnati and Craig Bless of Ontario. She was also very close to her Bay Area family — the Beltons and Wardens, with whom she spent countless summers and holidays.
Ruth attended Pasadena High School and graduated from Blair High before attending UC Berkeley as an English major.
Ruth was very social at Cal, joining Gamma Phi Beta sorority, a group of women with whom she remained friends her entire life. Her sorority sisters remember her as possessing incredible confidence, wit and a keen intuition understanding other people, her friends and family. Ruth possessed a natural charisma that established trust with anyone she met, and with her sparkling turquoise eyes, gorgeous smile and jet-black hair, it was impossible to not share your life story with her. She was a wonderful listener and offered great advice on life. 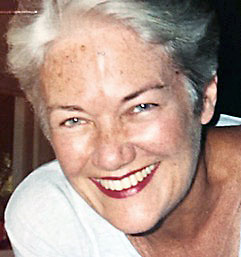