The Flintridge Prep varsity football team has clinched a CIF Southern Section playoff berth every season since it began competing in eight-man football three years ago.
The Rebels have consistently been one of the most competitive programs since 2016 but haven’t been able to get past the powerhouse programs such as Faith Baptist of Canoga Park, Mojave and Carpinteria Cate.
A slimmer Russell White has worked with this group for four years, and the Prep head coach believes this is the year his program gets over the hump.
“This group has that ‘it’ factor,” White said. “There still needs some molding to be done, but they bring that ‘it’ to the table. I’ve got successful guys who have seen the highs and the lows. They have what it takes to win.”

Despite losing All-CIF standout quarterback John Lytle, White is all smiles during practice with a predominantly senior group.
He feels close to this team, a relationship that has been developing since the players were freshmen.
“That’s why they give coaches four years,” White said. “They have been under your tutelage for their entire time. This is the year for me, and I told them that.
“I’ve been wanting this attitude for a while, and I knew this was the group to give it to me. The other teams were going through phases, but now that all four phases have been completed under me, this group just needs to go out and do their best. I think we’re going to do fine, barring injury.”

The Rebels have relied on big names the past few seasons, most notably Lytle, who was a three-year starter behind center.
Max Gitlin will step in behind center this season and rely on a talented group of wide receivers and running backs.
“He plays baseball and throws a mean fastball,” White said. “He’s not as tall, but he has that worker bee attitude. I don’t think our passing game will slow down.”
All-CIF receivers Zach Kim and Ben Grable, who will play at Northwestern next year, are back this season, as are running backs Tommy Porter, Alexander Payne and Charles McCormick.
“We got some good speed at receiver, especially with Tommy coming back from an injury,” White said. “He’s promising in open space along with Zach Kim and Ben Grable. We have three guys who can take it to the house any time.”

Eight-man football games tend to be high-scoring affairs because of the open space, and the Rebels plan on covering as much ground as possible with their speed.
“We’re fast, and I love it,” White said. “We’re physical and we’re going to be ready. This is that team. This is the team I’ve been waiting to see what they’re going to do in their time, and now is their time to shine.”
Grable was a middle linebacker last season and led the team in tackles, and Kim used his speed as a defensive back along with Payne, McCormick and Evan Gi. Germaine Harvey, Jack Crawford and Jay Hansen will slow down offenses in the trenches.
“If we can do the basics, which is tackling, then we will be just fine,” White said. “These guys are athletes. They are one of the fastest defenses I’ve ever had. They are legit speed guys, and I’m looking for great things from them.”
The road to a CIF-SS Division 1 crown won’t be easy for Prep, with teams such as Cate and Sage Hill of Newport Beach on the schedule. The Rebels will open the season hosting Hesperia Christian on Saturday, Aug. 31, at 4:30 p.m.
“What will help us accomplish our goals is if we stay together and stay away from that injury bug,” White said. “We must stay together as a unit. If we stay together, we’re going to be all right. In championship teams in my past, it was never one guy. Not one guy can do it all by himself. It’s about the team.” 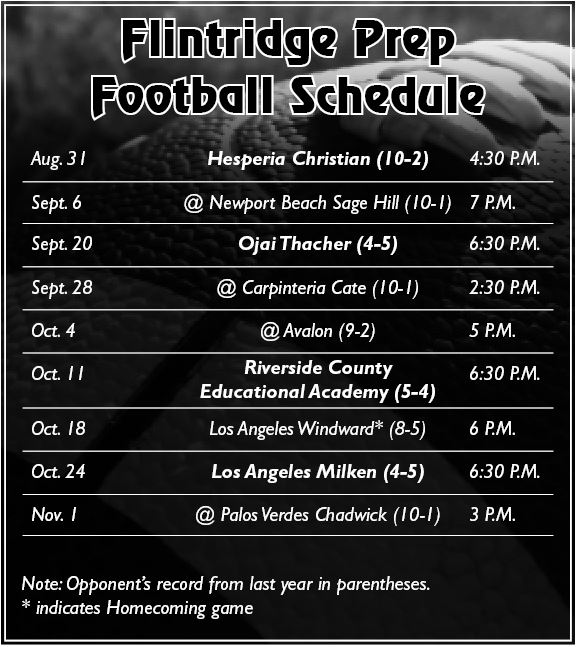