The San Marino High School varsity football captured its first Rio Hondo League championship in three years by defeating Rio Hondo League rival host Monrovia, 34-21, last Friday.
SMHS head coach Mike Hobbie bested the Wildcats for the second time since taking over the program in 2011. He also brought home the league crown for a second time, a feat he last achieved in 2015 when the Titans won the CIF Southern Section Central Division championship.
“It feels great,” Hobbie said. “It felt really good to beat Monrovia. Our kids really wanted to win and played extremely hard. They were extremely physical and at the top of their game.” 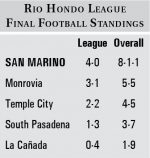 All hands were on deck for the Titans (8-1-1 overall record, 4-0 in league), who had been plagued with key injuries. In his second game back from a shoulder injury, quarterback Kade Wentz made a big contribution to the ground game with 151 yards and two touchdowns on 20 rushes. He also completed six of 11 passes for 76 yards and an interception.
One of his scores came late in the fourth quarter, giving San Marino a 27-21 lead. The defense came through in the final two minutes with a fumble recovery from linebacker Jackson Wendling. The Titans took advantage of the turnover and pulled away with a 13-yard touchdown run from Beau Hobbie.
Hobbie turned in another stellar performance, garnering 183 yards and scoring three touchdowns on 24 carries. He also had two receptions for 16 yards.
Wheeler Smith led all receivers with two catches for 47 yards, and Jacob Leftwich contributed two receptions for 13 yards.
Chris Wicke recorded a team-high 10 tackles and Seth Matzumoto and Wendling each added eight tackles. Neven Yarahmadi and Sean Richardson each intercepted a pass.
San Marino will enter the CIF Southern Section Division 9 playoffs as the No. 3 seed and hosts Segerstrom of Santa Ana in a first-round contest this Friday, Nov. 2, at 7:30 p.m.
“I feel good [going into playoffs],” coach Hobbie said. “It’s going to be a battle because they’ve got a real good team. I just hope our kids come ready to play and we give it our all.”