The La Cañada High School varsity baseball team extended its winning streak to 10 games by picking up a 3-1 victory at Monrovia on Tuesday.
Pitchers Luke Forgarty and Connor Buchanan held the Wildcats at bay and led the Spartans to their sixth Rio Hondo League win of the season. La Cañada improved to 12-2 on the season with a 6-0 record in league.
Fogarty earned the win on the mound, allowing one run on four hits and two walks in 4 1/3 innings of work. Buchanan pitched 2 2/3 innings of relief and struck out five to get the save. 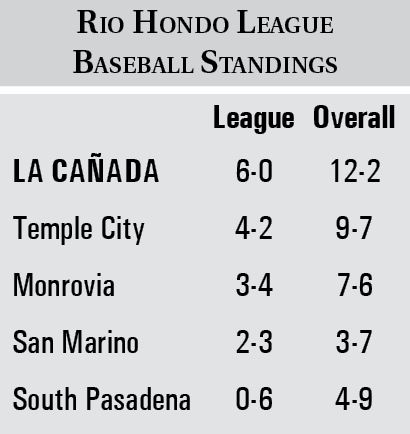 Fogarty helped his own cause with a single, run scored and run batted in, and Jason McCubbin Jr. hit a double and drove in a run. Tai Walton doubled and scored, Michael Callahan scored, and Ian Tinkham and Ryan Graves each singled. Zach Feehan and Walton each stole a base. The Spartans, ranked No. 2 in CIF Southern Section Division 3, faced San Marino on Wednesday and will return to action against Sun Valley Village Christian on Friday, April 5, at 3:30 p.m.

The Golden Knights were unable to recover a four-run first inning in a 4-2 loss at Encino Crespi on Tuesday.
Sophomore pitcher Ethan Sanders was dealt the loss after surrendering four unearned runs on four hits and two walks in three innings of work. Robbie Rivera tossed the final three innings and allowed only one hit.
Tommy Italia led the St. Francis offense with a triple and two RBIs, and Matthew Odom and Mikey Kane each singled and scored. Bradyn Muro contributed a single.
The Golden Knights (8-9 overall, 2-5 in league) will return to Encino to face Crespi this Friday, March 29, at 3:30 p.m.