The La Cañada High School varsity boys’ and girls’ swimming and diving teams dominated the Rio Hondo League finals at the Rose Bowl Aquatics Center last Friday.
The Spartans won at every level, and the varsity boys tallied 486 points to edge second-place San Marino for a second consecutive season.
The girls finished with 459 points, which was enough to defeat the Titans (442 points) and claim the league title for a second straight year. END_OF_DOCUMENT_TOKEN_TO_BE_REPLACED

The San Marino High School varsity baseball team extended its winning streak to four games, most recently defeating visiting Monrovia, 2-1, in a Rio Hondo League contest last Friday.
Two runs were enough for pitcher Noah Herrera, who tossed five innings and allowed one unearned run on four hits and three walks and struck out five. Kade Wentz relieved his teammate and allowed only one hit and walked one and struck out three in two innings of work to pick up the save.
Dihlan Anvekar was 1-for-2 with a run batted in, and Jazz de Perio and Tommy Long each scored a run. Beau Hobbie had an RBI, Wentz hit a double and Sean Richardson collected two singles and stole a base.
The Titans (5-7 overall record, 4-3 in league), who moved from fourth place to third last week with three league wins, hosted Brea Olinda in a nonleague game on Tuesday, April 2. San Marino will take a small break and return to action on Wednesday, April 10, against visiting South Pasadena at 3:30 p.m. END_OF_DOCUMENT_TOKEN_TO_BE_REPLACED

The Rio Hondo League has been dominated by one program for more than a decade and the San Marino High School varsity boys’ golf team is determined to put an end to that.
The Titans have shown potential during the preseason with a mixture of young talent and seasoned golfers.
“It’s actually a really young team, which is exciting,” said SMHS head coach Matt Jiggins. “We have three freshmen, one sophomore and two seniors making up our top six.” END_OF_DOCUMENT_TOKEN_TO_BE_REPLACED

The San Marino High School varsity baseball team dropped its first Rio Hondo League game of the season last Friday, falling to visiting La Cañada, 5-0.
The Spartans got on the board in the fifth inning and added three more runs in the top of the seventh to build a five-run advantage.
The Titans (1-5 overall record, 0-1 in league) were held to only two hits in the contest. Sean Richardson and Grant Spitzer each singled for SMHS and stole a base. END_OF_DOCUMENT_TOKEN_TO_BE_REPLACED

The San Marino High School varsity boys’ wrestling team recently proved it is no longer in rebuilding mode after claiming its first Rio Hondo League crown since 2016, and the program reestablished itself as one of the best in the CIF Southern Section last weekend by placing second in the Southern Division Wrestling Championships at Brea Olinda High School.
Eight Titans placed among the top five and qualified for this weekend’s CIF-SS Masters Meet at Cerritos College in Norwalk. San Marino tallied 212 points to take home the runner-up plaque. Villa Park finished with 256.5 points to win the Southern Division championship. END_OF_DOCUMENT_TOKEN_TO_BE_REPLACED 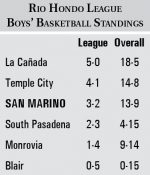