It was a recent Wednesday afternoon, and the Rev. Andy Bales, Union Rescue Mission CEO, had already put in a 38-hour workweek. As head of one of the nation’s largest and oldest missions of its kind, perched in the dubious center of Skid Row on South San Pedro Street, the Pasadena resident has doubled down on his efforts to rescue the estimated 58,000 men, women and children experiencing homelessness across L.A. County.
That means Bales gives out his cellphone to anyone who needs it, answering those calls at all hours and driving hundreds of miles to retrieve desperate people and their belongings and bring them to the Union Rescue Mission shelter, where more than 13,000 people are given lodging and food daily. He does this to save every person he can from the inhumanity of sleeping on the street.
“I’m haunted by anyone being on the streets of L.A. We need immediate solutions because I know the devastation of experiencing homelessness,” Bales said.
Bales originally moved to Pasadena from Des Moines, Iowa, to take a job as a reverend of community outreach for the Lake Avenue Foundation. He also served for years on the board of Harambee Ministries, which will honor Bales at their upcoming benefit this Saturday, March 3.
He quickly began a relationship with many of the Pasadena homeless, and “those that are still alive,” he said, still call out to him with a “Hey, Pastor Andy!” when they see him around town.
Harambee Ministries Executive Director Harlan Redmond said selecting Bales as honoree was a “no-brainer.”
“I wanted to recognize him for some time as a co-laborer; the lengths Andy Bales has gone through to advocate for the homeless, for those who have no voice, no leverage, is impossible to quantify,” said Redmond, who meets regularly with Bales. “We don’t even know half of what he does, in the trenches every day, to make sure families stay off the street and making sure the kids are safe.” 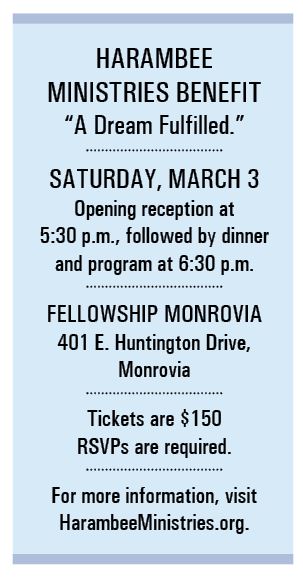 A friend of Bale’s recently posted on Facebook: “The one place you can call 24/7/365 is Andy Bales at Union Rescue Mission when you have a family in need.”
Bales smiled at that — he’s proud of it, even if he was a little tired on a Wednesday. The night before, he sat outside the mission with a woman who pitched a tent with her children, refusing offers of help. She was mad at Union Rescue Mission. He and his team still stayed — they had to make sure her children were safe.
“We always say yes. We never turn away a family with children, never turn away a woman who comes to our door, never,” Bales said, easing into an office chair to discuss his 35 years of experience in community outreach and service to those “experiencing homelessness,” as he refers to it, because being homeless should never be a state of being.
Bales gets more than 1,000 emails a day, plus messages on Facebook, Twitter, LinkedIn and other platforms.
Union Rescue Mission has served the less fortunate on the streets for 127 years, beginning as a group of gospel wagons offering food, clothing and salvation to the impoverished. It grew over the years and expanded its efforts to feed both the body and the person, helping individuals and families break the cycle of poverty.
When Bales came on board 14 years ago, he brought a fresh fierceness to the leadership. He played a pivotal role in reshaping hospital and governmental policies, including those related to “dumping” of homeless patients from hospitals on to the streets of Skid Row. That happened after Bales and his team caught (on their outdoor cameras) an ambulance dumping a homeless woman on the street in nothing but her hospital gown.
Union Rescue Mission bought an abandoned retirement home on a 77-acre campus in Sylmar in 2005, providing permanent supportive housing for senior women, some of the most vulnerable on the streets, in a facility called Hope Gardens Family Center.
And against community backlash, Bales was able to open the facility for women and children as well in 2007. It offers living up to three years, with educational training and supportive services.