“Give me your tired, your poor, your huddled masses yearning to breathe free,” so read the iconic words etched at the base of the Statue of Liberty.
But during the past week of patriotic parties, one wonders if American poet Emma Lazarus, who penned the sonnet for the country’s beacon of freedom, could have imagined that 134 years later, the nation that is considered the world’s wealthiest also would be home to some 42 million people struggling with hunger, including 13 million children and 5.4 million seniors don’t have enough to eat, according to Feeding America. 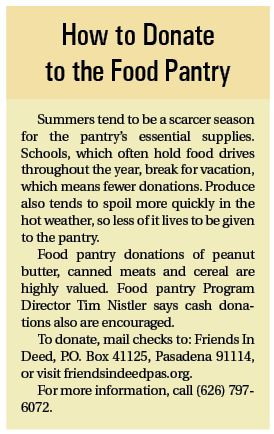 Perhaps Lazarus might take heart, however, that in communities across America, nonprofits such as Friends in Deed in Pasadena strive to combat that hunger and give dignity back to the working poor through food pantries.
Located at the corner of Washington Boulevard and Los Robles Avenue, the interfaith collaborative Friends in Deed food pantry serves as a little market, allowing clients to shop for the food they like and need, especially fresh produce and proteins such as meat and chicken.
“This place is a real life-saver — I’m super appreciative of these guys,” said Ife Sangode, who was shopping at one of the food pantry’s new Thursday openings. The pantry just expanded its hours to open three times per week from the longstanding two days.
Sangode, who studied psychology at Cal State Northridge, was juggling her shopping bags and 1-year-old daughter, Azana.
“I’m trying to get back on my feet,” she said, noting that being a young mom with no day-care options has made it difficult to work. She added that helping to pay for rent with her family doesn’t leave much money for food, especially with dietary restrictions — Sangode has to eat gluten-free, which tends to be more expensive than normal food.
“I try to eat as healthy as possible for me and my baby, and here they have tons of produce, even organic, and gluten-free bread and desserts sometimes,” the young mom said.
The food pantry feeds about 300 households and about 700 people like Sangode each week. Celebrating more than 120 years of service, Friends in Deed tries to meet the needs of community clients by leveraging a small, dedicated staff, with up to 40 volunteers per week. While the food pantry serves mostly those living in Pasadena and Altadena, it doesn’t have real ZIP code barriers, said Tim Nistler, program director of the Friends in Deed food pantry.

“As a team we’ve decided not to set boundaries for people who need food,”
Nistler said, juggling a weekly pickup from the Los Angeles Regional Food Bank, the pantry’s No. 1 supplier for staple foods.
Nistler, who started at the food pantry five years ago as a volunteer, said he’s become friends with those who come regularly for food, even setting aside certain items for people with babies or food restrictions.
“I have more than 300 friends and family who come here, and I want them to have good-quality food,” he said. “Though I’m always happy to see people, it can be a weird feeling, because I know that if they’re back here it’s because they’ve fallen on hard times again.”
Although the pantry serves a diversity of ethnicities, the primary users tend to speak English, Spanish or Chinese, and be anywhere between 25 and 90 years of age. But over the past year or so, Nistler said he is seeing the pantry’s demographic change.
“We are seeing more seniors here than before. That’s a bit concerning to me. It’s not a good sign. To have to continue to rely on food pantries after spending their whole lives working and trying to make ends meet is heartbreaking to me,” Nistler said.
Friends in Deed Executive Director Joshua Levine Grater confirmed that growing dynamic. “Seniors are becoming more vulnerable with rising rents, less savings, medical bills and the high cost of living,” he said. “Retirement funds for many were not available or lost in the recession. Many children are moving back in with their parents, so financial issues are spread all over.”
Asian seniors are especially at risk, prompting the pantry to provide signs and instructions in Mandarin. Nistler has also noted that items such as canned bananas, lychee and quail eggs fly off the shelves.
Friends in Deed Board Chair Richard Cheung said the pantry’s purpose is simple. “We get to feed people. A growing number of poor people can’t afford food, so we give them the opportunity to ‘shop’ [choose their food] in a very dignified way. We provide people with normalcy.”
Cheung also noted that Friends in Deed is exploring expansion to a larger facility, since the group’s current location is inhibited by storage space.
Apart from serving those who need food, the Pasadena food pantry has become a positive place for people who would like to give back and volunteer time. CIT Bank volunteers have become regulars as they start a service month in June.
“We came last year and really enjoyed it. It just feels very rewarding to know you’re doing something as good as helping people receive food,” said Diana de los Santos.
Her colleague, Neeta Wheeler, echoed that sentiment as a group of CIT employees stocked shelves with new food arrivals before the pantry opened. “It’s so nice to see all the donations that come in; it’s good to know that stores aren’t just throwing food away, that they’re donating it to people who need it,” Wheeler said.

While the majority of staples come from the L.A. Food Bank, the pantry receives private donations from local families and also partners with many local groups, including Pasadena Farmers Market, Trader Joe’s, Whole Foods, Smart and Final, Food Forward and Costco. Congregations, civic groups, scouting troops, businesses, schools and youth groups also donate food and volunteer time.
Yet despite those donations, summers tend to be a scarcer season for the pantry’s essential supplies. Schools, which often hold food drives throughout the year, break for vacation, which means fewer donations. Produce also tends to spoil more quickly in the hot weather, so less of it lives to be given to the pantry.
Nistler said staple items that he is always happy to see dropped off include peanut butter and canned fish or meat, as well as “gold items” used for cooking, including sugar, flour, salt and oil. And as always, he notes, monetary donations are welcome and go a long way when he makes purchases for the pantry’s shopping wish list. Those donations can be made through the website at friendsindeedpas.org.