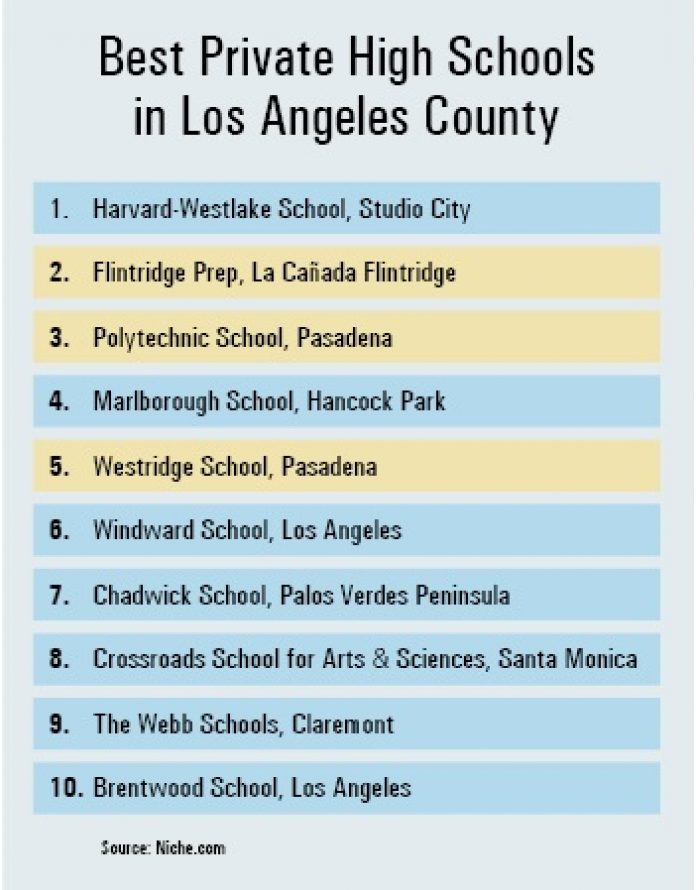 A trio of Pasadena-area high schools scored in the top five among private schools in Los Angeles County, while eight San Gabriel Valley campuses were ranked among the top 20 Catholic schools by the review website Niche.com.
Out of the 2019 top private high schools in the county, Flintridge Prep of La Cañada Flintridge won the No. 2 spot, Polytechnic School came in at No. 3, and Westridge School garnered No. 5. By comparison, under the 2018 ranking for all of Southern California, Polytechnic ranked fourth, Flint­ridge Prep fifth and Westridge seventh. 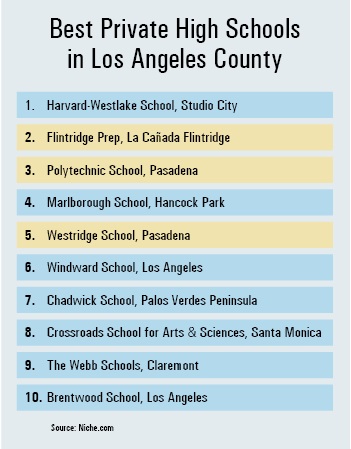 Compared to the county’s other private schools, Mayfield Senior School came in at No. 17 and Flintridge Sacred Heart Academy of La Cañada Flintridge was No. 24.
In Niche’s ranking of the top 100 nationwide, Flintridge Prep was in 14th place, Polytechnic 21st and Westridge 58th.
Among L.A. County’s top 20 Catholic schools, Mayfield Senior was given the No. 2 spot, Flintridge Sacred Heart No. 4, La Salle College Preparatory No. 8, St. Francis High School of La Cañada Flintridge No. 9, St. Monica Academy of Montrose No. 13, Ramona Convent Secondary School of Alhambra No. 14, Alverno Heights Academy of Sierra Madre No. 18 and Don Bosco Technical Institute in Rosemead No. 19.
In a ranking of the best public school districts in the county, La Cañada Unified School District was in first place, San Marino Unified School District in second, Arcadia Unified School District third, Palos Verdes Peninsula Unified School District fourth, and South Pasadena Unified School District fifth.
Niche claims it has the “most comprehensive data available” on U.S. public and private K-12 schools and districts. The website says it rigorously analyzes data from the U.S. Department of Education, more than 60 million K-12 school reviews and survey responses to help families find the right school for them. The 2019 ranking of private high schools was based on an analysis of data from the Department of Education along with test scores, college data and ratings collected from millions of Niche users. The breakdown of factors that are considered: composite SAT/ACT scores, 30%; top colleges students are most interested in or go on to attend, 25%; college enrollment, 15%; racial and economic diversity, 10%; parent/student surveys on overall experience, 10%; and student-teacher ratio, 10%.
This is the second year Niche has produced rankings by county.