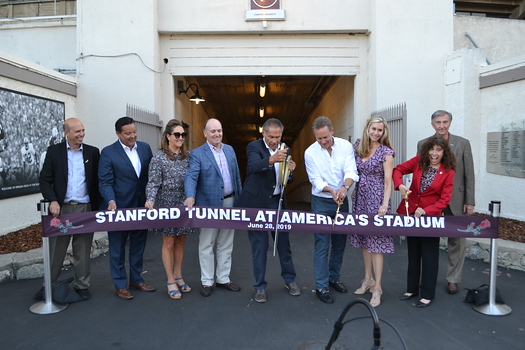 The Rose Bowl Legacy Foundation has renamed Tunnel 7A in honor of Stanford University. Tunnel 7A is located on the northeast concourse of the famed Rose Bowl next to the new Legacy Foundation offices. The renaming was dedicated in a private ceremony that was held recently.
Steve Olson and Peter Zarifes, members of the foundation’s board of directors, were co-chairs. The local residents have personal ties to Palo Alto and the storied history of Stanford football.
The gifts to name the tunnel were among contributions to the foundation’s ongoing centennial campaign, which began in November 2017 and has a goal of raising $40 million in new gifts to preserve, protect and enhance the future of the Rose Bowl as a National Historic Landmark.
“We are so proud to dedicate and rename Tunnel 7A in honor of Stanford University. Stanford has played a major role in the Rose Bowl Stadium’s history, having played in the first postseason bowl game in 1902 [the East-West football game in Pasadena] and in 15 Rose Bowl games throughout history,” Zarifes and Olson said in a joint statement.
“The tribute to Heisman Trophy winner Jim Plunkett at the tunnel is also apropos, as he not only guided Stanford to an electrifying win over Ohio State in the 1971 Rose Bowl Game, but he is also the only player in Stanford history to be named MVP of both a Rose Bowl game and a Super Bowl. We thank everyone who helped make this naming a reality.”
Two special displays at Tunnel 7A are commemorating the naming, including a plaque above the tunnel recognizing Stanford and a historical photograph on the adjacent wall to recognize Stanford’s 1971 victory. A plaque publicly recognizes contributors to the project.
“The impact of Pac-12 and Big Ten conference schools has been long felt at the Rose Bowl Stadium. It is part of the tradition of the Rose Bowl game,” said Chief Development Officer Dedan Brozino. “Honoring one of the schools in such a personal way is a special opportunity to recognize the rich history of the game and its multi-generational impact. It also shows how diverse the pool of participating universities has been since the stadium opened its gates in 1922.”
The renamed Stanford Tunnel will sit alongside the Legacy Center, the new offices for the Rose Bowl Legacy Foundation, which opened in March. The offices are located within the second of two original locker room spaces at the venue, a proximity that speaks directly to the foundation’s mission to preserve, protect and enhance the future of the Rose Bowl as a National Historic Landmark.
The stadium, built in 1922 and known around the world, has hosted five NFL Super Bowl games, the 1984 Olympics soccer matches, the 1994 World Cup, the 1999 Women’s World Cup, and four Bowl Championship Series national college football championship games.
For more information on the Legacy Foundation’s centennial campaign, visit inspire2022.org.
see additional photos.