The thing about a great idea is nobody knows they need it until it exists.
Such was the case for Math Academy at Pasadena Unified School District, an advanced math program that is guiding its students to complete AP calculus in 8th grade so they can dedicate high school to college-level proof-based mathematics, including investigative research of probabilities and abstract formulas. By the end of high school, in fact, students might finish the equivalent of three quarters of an undergraduate mathematics degree.
Jason and Sandy Roberts, the parent volunteers and founders of Math Academy, know that the success of their great idea lies in its execution. The two are working diligently with the district to build the curriculum capable of incubating as many as 250 math students in one school year — “our own mini-CalTech,” quipped Jason — with 50 graduating each year from Pasadena High School Math Academy.
And, well, if the Roberts’ Math Academy could go national, what could that mean for American universities and domestic-based research?
The Roberts rub their palms together at the idea, as does everyone who, infectiously, has come on board since seeing the class in action in its infancy as a part of math field day at McKinley School. They point to research showing that in American colleges, 40% of students in STEM majors drop out as freshmen, and another 40% drop out as sophomores. A large reason for the dropout is they can’t do the math, Jason said. And many of those who do succeed in undergraduate science majors are from foreign countries.
“Why is that? Are foreign people smarter or are they better prepared?” Jason asked. “You know, it’s really hard to tell the difference between a genius and someone who’s just seen something before.”
Math Academy grew organically, almost accidentally. The Roberts were recruited to coach their eldest son Colby’s 4th-grade Math Field Day, when no one else was available. The GATE program coordinator handed them a list of students “and a bag of Jolly Ranchers,” laughed Sandy, who had the first fundamental idea: Find their weaknesses.
The kids took an assessment test, and Jason started showing about 18 of them problem-solving skills, filling in the gaps of their grade-level knowledge. “There were things they didn’t know because they just hadn’t been taught, like adding and subtracting negative numbers. That just couldn’t stand, so we started with that,” Jason recalled.
The kids seemed to devour the material. They were uninhibited in class, a room with few rules, on their feet at the white board, playing and talking in between problems. The Roberts created new work sheets they could take home, and the students came back ready for more. Even Jason was surprised at how quickly they were learning from his “nonlinear” teaching methods, moving from one topic to the next, and then backtracking again.
“Their excitement and enthusiasm were what really kept pushing us forward — the more we taught them, the more they wanted to learn,” Sandy said.
After one of their math competitions, Jason leaned back and took in the whole picture, realizing, solemnly: “We’ve got lightning in a bottle here.” 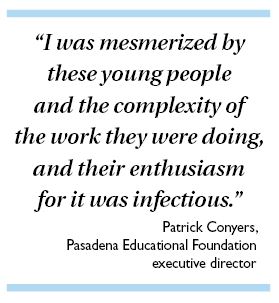 She knew her husband was thinking big. Sandy recalls just shaking her head, telling him, “You have no idea the amount of red tape and bureaucracy, honey.”
The Roberts, by the way, are not teachers, but have math expertise.
Both graduated from the University of Chicago, where they met; Sandy with an economics degree and Jason mathematics. He had plans to become a mathematician, but got sidetracked into writing code for technology startups and building high-frequency trading systems. By the time they were settled in Pasadena, he turned down the CTO position at Uber, not wanting to relocate to San Francisco. “It was called UberCab at the time; I wasn’t going to turn my life upside down for a cab company, you know, it wasn’t something I wanted on my tombstone,” he joked. Instead, he opted to work as a consultant, and ultimately developed much of its real-time and foundational technologies. To this day, he works in consulting and advises startups on technology strategy and product roadmaps.
“I always knew I was good at explaining stuff to people. I enjoy the challenge of making something that might seem hard, easier,” Jason said. “I don’t know why people try to make some things so complicated.”
With a knack for explaining and a flexible schedule, Jason was able to focus on Math Academy with Sandy, also a volunteer with Pasadena nonprofits such as Junior League of Pasadena, Young & Healthy and the Pasadena Educational Foundation.
While at PEF, she met PUSD Superintendent Brian McDonald, also a former math teacher, and at the end of 5th grade, she asked him to come by and see the math enrichment class in action. He was so impressed, he asked them to help launch a pilot program right then and there. McDonald was instrumental in setting up the right people to make Math Academy official, hiring skilled teachers for replacement math classes.
One of those steps was bringing PUSD Director of Curriculum Helen Chan Hill on board. Chan Hill cut through the red tape, (“she’s one of those incredibly efficient people,” noted Jason), so that he and Sandy could focus on teaching. Within a year, they were able to get the curriculum recognized through the University of California as accredited courses.
Chan Hill said it may have been a stroke of luck that all those involved in getting the program solidified at district level, including herself, were former math teachers.
“I don’t think I ever imagined a math academy at this level … I’d been wanting something like this since I was teaching math,” she said, emphasizing that in the past, when a student excelled at the subject, they were just pushed through the same material at a faster pace. “I always wanted something deeper and applicable and that could leverage them onto something beyond our world.”

Finding the right teachers also has been critical, she said.
One of those is former Clemson University professor Hiren Maharaj, who has a doctorate in mathematics from Penn State University. Recently moved to California with young children and an oncologist wife, Maharaj was looking for part-time work when he heard about Math Academy. He met up with the Roberts in class to understand the job description they had written.
“I was skeptical. It sounded too good to be true; I couldn’t believe what [Jason] was saying about these kids,” Maharaj said. “But when I saw his class, I saw at least five students doing what college students do, doing proofs.”
Maharaj now teaches Math Academy to 6th and 7th graders at Sierra Madre Middle School. “I’m a believer now. Every time I’m concerned they can’t grasp something, they’ve proven me wrong. There’s something about grouping them together that makes this work … they feed off each other.”
Coming from university-level teaching, Maharaj never thought he’d see such young kids learning advanced math methods. He loves the idea of what they might do when they reach college.
“This program is a game changer. They’ll engage in more investigative type research math by college; it’s very exciting. I’ve never seen this happen anywhere else.”
To make sure the kids are on track and covering all the “regular math,” the Roberts make sure the kids take available assessment testing.
The first group of Math Academy students, now 8th-graders, recently took the PSAT, and scored in the 99th and 98th percentile. The 7th-graders also scored high on the test, with four of them in the 99th percentile, and one of them earning a perfect score.
For parent Laura Diaz Allen, the test results were reassuring, but not surprising. Her son, Nathan, loves all things math and robotics. (He’s been saving two years to buy a “Mindstorm robot thing — he’s just one of those kids,” she said.)
Diaz Allen was a little apprehensive at first, but seeing how much her son loves the program and how much he’s advanced, she has no regrets.
“I can’t help him with math anymore… I don’t know what language they’re speaking in that class!” she joked, but adds that the Roberts have opened a new door for kids like her son. “Jason really cares about the kids, he wants them to have awesome lives and find their talents. I’m seeing a path for my son that I didn’t see before.”
Math Academy is also getting big recognition. Recently, the W. M. Keck Foundation gave it a three-year, $300,000 grant to help it expand and solidify its curriculum and program.
Patrick Conyers, executive director of PEF, helped Math Academy get its grant funding, also offering advice, along with the Pasadena Community Foundation. He’s worked closely with the Roberts, and was impressed from the get-go with Jason’s in-class instruction.
“I was mesmerized by these young people and the complexity of the work they were doing, and their enthusiasm for it was infectious,” said Conyers, noting that Jason’s background has helped him know how to push a good idea. “Sometimes you don’t know how far you can go until you start pushing. Jason is like that — in the classroom he resembles more of a sports coach than a mathematician. He really pushes them to reach their maximum potential.”
Going forward this year, the Roberts hope to make Math Academy a standalone nonprofit, with Sandy executive director and Jason president of the board. Jason has created software for an online computer homework program, able to analyze the students’ strengths and weaknesses onto spreadsheets and then review the necessary material to catch up.
The Roberts know they have a great idea — and if they can do it here, they can do it elsewhere.
“Our big goal is to create a nonprofit that will include the possibility for the entire program to be replicated and exported to any school district that wants it, including the curriculum and entire software platform, training and mentoring,” Sandy said. “So that all a school district has to do is pick up the phone and say ‘We want this.’”