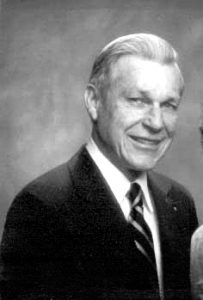 Bruce was born on April 27, 1926, in Washington, D.C. to Arthur McGregor and Mildred Pardoe, the second of 4 brothers. He grew up in the Westwood area of Los Angeles. Although he was a shy and reserved young man, he loved his neighborhood Scout troop. He would often tell stories of camping in Yosemite with his dad, brothers, and scouting friends and the timeless life principles he learned there.

At 17, he enlisted in the Naval Air Corps during WWII. Though things often looked hopeless, his persistence and diligence during training finally paid off, and he actually learned to fly planes (which always filled us with awe). Soon after the war, he was called on a mission to Switzerland for The Church of Jesus Christ of Latter-Day Saints. He loved the Swiss people and stayed close with a group of mission companions his whole life (The MACFAC group–Many Are Called, but Few Are Chosen–based on the fact that so few were able to get into Europe after WWII).

After the war, he had a short stint at UCLA, and then attended Stanford Law School, graduating in 1952. It was a rigorous experience, and one for which he felt ill-prepared. The class was so distinguished that two of his classmates later became justices on the United States Supreme Court. Again, his diligence and tenacity paid off, and, shortly after graduation he was practicing law in Los Angeles with his father and other partners. Dad always felt his greatest life achievement was finding and persuading Mom to marry him. Until then, he said, his life was not complete. He married Helen Nanette Felsted on May 10, 1960, in the Salt Lake Temple. They moved to the Pasadena area, and eventually raised five children in San Marino.

Dad believed in civic service and, although he had no taste for politics, was persuaded to run for school board, where he served with his typical dedication and integrity for 13 years and was ultimately honored with the Golden Apple award. Bruce also served as a scoutmaster for several years, and one year was the Tournament of Roses Scoutmaster. His work with scouting earned him the Silver Beaver award in 1986. Bruce also served for 8 years as the Public Affairs Director in the LA area for his church, where he loved making new friends of many different faiths. For this and all his public service, including his 20-year service as a Huntington Gardens docent, Bruce received the Rotary International Paul Harris Fellow award for his contributions to “friendly relations between peoples of the world.”

In 1986, Bruce was called to be the Stake President of the Pasadena Stake of The Church of Jesus Christ. He was shocked, as he always considered himself to be a poor speaker (his emotions often got the better of him) and did not at all care for the limelight. Always the historian, he made sure that during his tenure, a stake history was produced. When completed, the history was presented at a stake conference where all the former stake presidents attended, including Howard W. Hunter, the President of the church at the time. Referring to someone from his past, Dad would often say, “Oh, they wouldn’t remember me,” because he considered himself very ordinary: someone who preferred to be behind the scenes.

But they usually did remember him. Because Dad treated everyone he met with such dignity and love, he was hard to forget. The person he knew best was Jesus Christ. He spent his life endeavoring to follow Him and helping others to know and love Jesus Christ as well. May we honor his legacy by trying to do the same.

Funeral will be online: January 9 at 10:30 a.m. Email bmcgfuneral@gmail.com for the link